Family Bible time for the week of July 5-July 11

Family Bible time for the week of July 5-July 11 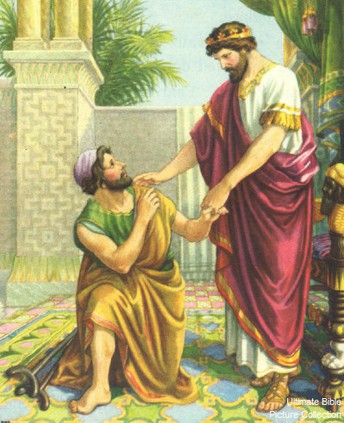 Five-year-old Mephibosheth had everything to be thankful for. His father, Jonathan, was the crown prince and life was good. Then everything fell apart. Both his father and King Saul, his grandfather, were killed in battle on the same day. When the news came, Mephibosheth’s nurse picked him up and fled, but in her hurry, he fell and became permanently injured. Mephibosheth couldn't walk, and was prevented from being king. A man named David took the throne. What was there to be thankful for now? But God is faithful and so, it would turn out, was King David, who years later, remembered his friendship with Mephibosheth’s father, Jonathan.

Heavenly Father, You give us good gifts every day, but we often forget to thank You. Help us to give thanks for all that You give to us, especially for the love and forgiveness You give us in Jesus. In His name we pray. Amen.

On the Farm | Elementary | Kindness Is Showing God's Love to Others

King David was kind to Mephibosheth because he had made a promise to his friend Jonathan to show love and kindness to Jonathan's family. Also, David was thankful to God for all the blessings God had given him, and so he shared God's love with Mephibosheth.

In ancient times when a new king took the throne, he usually killed all the members of the family that had been in power. Instead of treating Mephibosheth like an enemy, David treated him like his own family and brought him to the king’s table.

Talk about ways that you can be kind and share God's love with others this week.

Oh give thanks to the Lord, for He is good, for His steadfast love endures forever! Psalm 107:1

Dear God, thank You for Your gifts of love. Thank You for (let each person share one thing they are thankful for). Help us to be kind to others and to share Your love with everyone around us. In Jesus’ name we pray. Amen.