Read why I think Laissez-faire economics is bad.

Read why I think Laissez-faire economics is bad.

Smith was wrong when he stated "laissez-faire economics is sound, logical, and advisable, even regarding child labor." There were many children suffering from child labor in the industrial revolution, and that number was on the rise. Of those children, a lot of them had poor working conditions, which could have resulted in injuries. 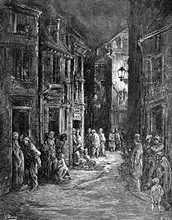 Some Things Laissez-Faire would be bad with...

Laissez-faire economics would be bad with a lot of economic problems. They should need government with these major issues.

Laissez-Faire economics would not be "sound" regarding labor. The government should step in to help out the laborers. But Smith thinks they should do the opposite. If the government steps in they could pass an act or make a law that would prohibit or lessen the amount of laborers there are.

Adam Smith's opinion, is bad with Class. This is because, the higher class, pretty much dominated the lower classes. The government should have made it so that, the lower class, could have more power, and they could be closer to equal with the upper class.

Connect with Alex B