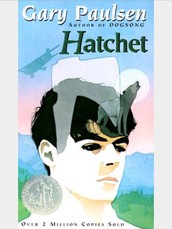 Lost and alone in the wilderness with only a hatchet, how long will Brian survive? The book I am reading in ELA is called Hatchet. In this book there is a boy named Brian who is thirteen and he is going to visit his farther. While he was on the private plane when they were flying, the pilot had a heart attack. The plane was crashing. When the plane crashed the pilot died but Brian was still alive. In the plane was a first aid kit and a Survival kit. Brian looks in it and it had food, weapons, and drinks that lasted him about 2 weeks!

Lives in: The woods

Works as: A baker

Lives in: The woods

Where did the plane crash?

This is a picture of the Canadian wilderness