Keiran is using Smore newsletters to spread the word online.

Get email updates from Keiran:

The problem to be solved

Landfills are increasingly taking up spaces around the world and apart from destroying the natural beauty of the earth, they pose serious risks to the environment and life. Three main problems associated with landfills are the toxins, leachate and greenhouse gases released. Toxic substances in landfills leach into the groundwater and soil and become a hazard. Additionally, when waste in landfills breaks down, a liquid called leachate is discharged and this contaminates the soil, the ground water and the water ways. Thirdly, when organic materials such as food scraps end up in landfills, they becomes compacted and eventually release methane, a greenhouse gas which is 21 times more potent than carbon dioxide. Methane is also flammable and can cause fires.

My project looks at the reduction of greenhouse gases which can arise if each household begin to compost food scraps. According to eartheasy.com, at least a third of all of the waste in landfills in America are compostable and at least 30% off all household trash are compostable. I conducted an experiment in my home over five days to determine how much food scraps were being disposed of and on the sixth day I began composting. I present my findings below.

My Green Design project is about composting. I used table scraps of fruit, vegetables and left over foods in my compost. I excluded all meat products as I did not want to encourage roaches or rodents in my home. Fruits, vegetables and table scraps, according to eartheasy.com, give off nitrogen. Nitrogent allows for these scraps to breakdown faster. Hence, latent nitrogen was a part of my project design. I used a household bucket to store my compost.

Benifits of your Green Design Project

My Green Design Project is very beneficial as it allows me to start an organic garden which means I can consume some pesticide-free foods. Composts are a rich and free source of nutrients for garden soil. It also helps to keep the soil moisture and to ward of diseases. While my project was limited only to my home, it has helped in the reduction of greenhouse gases in a minute way as the food scraps from my home is no longer going into the garbage. This is an eco friendly solution from one home to the planet.

My Green Project will positively impacted on plants and herbivores because compost yield richer plants which will then allow for a richer diet by herbivores which feed on these plants. And now, instead of the household scraps adding to greenhouse gases in landfills, composting allows for plants to grow. The growing plants need carbond dioxide and will absorb it from its enviornment and in exchange will release oxygen. Additionally, composting creates additional soil, another abiotic factor.

The use of renewable resources in Green Project Design

My project is design to add to a renewable resource. Compost is a renewable resource because as long as humans exist, they need food, and from their food scraps composts are made. Composts also allow for oxygen supplies to be replenished as it enriches the soil and allows for plants to continue to grow. Plant breathes out oxygen.

The return on my investment in composting would be a reduction in green house gases, healthier vegetables (plus garden exercise for me), more oxygen, a reduction in carbon dioxide, less need for the nonrenewable resources of fertiliser and oil and less need for landfill space. Additionally, the health hazards associated with landfills will be lessened, somewhat.

The graph shows the

The final set of pictures show the first day of my composting, the fifth day and the tenth day. 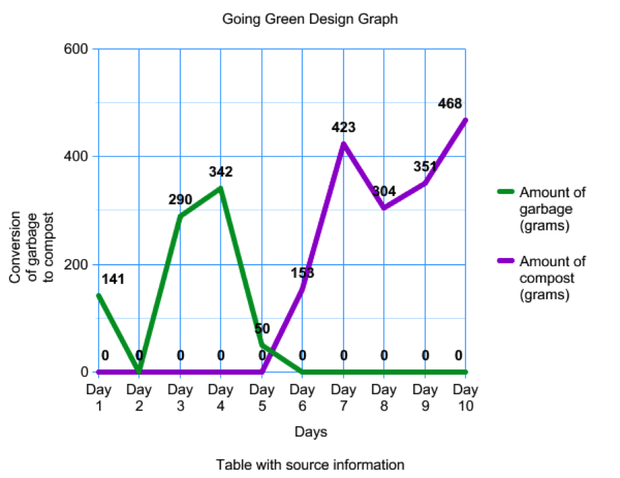 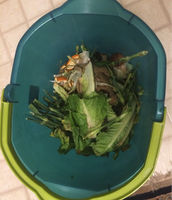 The picture of before composting.

The picture of during composting.

The picture of after composting.

Keiran is using Smore newsletters to spread the word online.