- Central Asia is made up of 5 countries Kazakhstan, Turkmenistan, Kyrgzstan, Uzbekistan, and Tajikistan

- Most of Kazakhstan consists of dry grasslands, plains, and plateau's

- The Ural Mountains run North and South through Russia and are considered the boundary of Asia through Europe and Russia.

- Most of the mountains in this range are mainly volcanoes

- West Siberia is one of the worlds largest and flattest plains which covers 1 million square miles, while Northern Siberia is mainly A Tundra.

- Most of the region is covered in permafrost due to the swampy taiga. Their is about 2/3 of Siberia covered by Permafrost.

(The Picture is a View of the Caucasus Mtn. 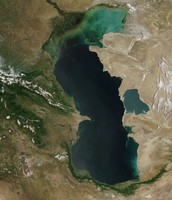 The Caspian Sea separates the Caucasus Mtn. and Asia.

The Caspian sea is also known as the biggest inland body of water in the world, with its size being nearly as big as California.

(The Picture is a view of the Caspian Sea from Orbit)

(The Picture is a view of a beautiful part of Siberia, with Blue Ice)

- Oil and natural gas resources are found in Kazakhstan, Uzbekistan, and Turkmenistan

- In Kazakhstan, Tajikistan, and Uzbekistan. Kazakhstan their are large deposits of coal

- In The mountains of Tajikistan and Kyrgyzstan contain rich mineral resources, which is the same as the eastern mountain areas of Kazakhstan and Uzbekistan. Gold, mercury, copper, iron, tin, lead, and Zinc

- During this time Kingdoms called Georgia and Armenia both had periods where they ruled during their long history, both also being powerful Kingdoms. Around 300 A.D they both threw off the Persian rule and then established kingdoms. Then they become the two earliest countries to convert to the Christian Religion

During the 1700's Russia began to claim land in Central Asia, and began to rule the land. As time went on during the mid-1800's Russia was already ruling most of Central Asia, so they began to grow cotton throughout Kazakhstan and Uzbekistan. During this time to, but later the Russians began to irrigate the land to increase the population. During the process of irrigating the land the Russians also built the worlds largest canal called the Kara-Kum Canal.

Later on during the year of 1917 which was during the Russian Revolution parts of Asia began to declare their independence as their own countries. Moving on to the 1990's+ the Russians now called "Soviets" began Oil production giving a good source of income. But soon after the Soviet Union then collapses, giving back independence to our modern day countries of Central Asia. 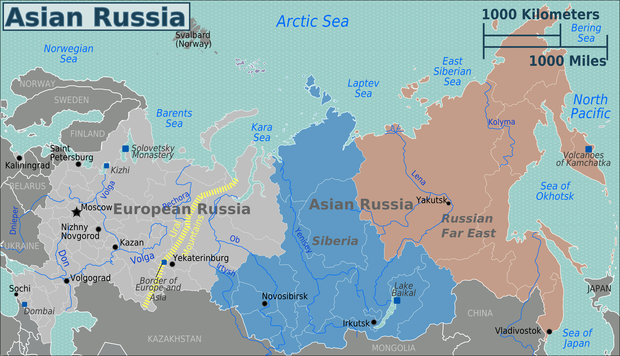 Most Rural housing is Central Asia is basically like a round tent made out of waterproof wool, or various different types of animal furs. These Huts are mainly Settles in the Caucasus Region or in/near an Oasis.

- Turkmenistan is completely diverse and divided equally between people living in Rural Area, Cities, and Large Towns, Ethnic Turkomans take up Three Fourths of the Ethnicity, With Russians Coming in on second taking 10% of the Ethnic population

- About two-thirds of Kyrgyzstan’s people are Kirghiz. The Kirghiz were once nomads who were settled in the land.

Russian is considered the main Language in Central Asia, as well as Christianity being the main religion, with Russian Orthodox dominating the religion system. Buddhism as well as Islam are beginning to make its way much more into Central Asia

Even after the Soviet Collapse Most Central Asian people is still somewhat lasting. in the Caucasus are widespread with much Russian Culture influence, which was still from the Old Soviet Rule.

- During the time of Soviet Rule, their were problems with bordering, near the land of the Asian Caucasus Republics, which was called Amu Dar'ya. This also caused a big Ethnic issue.

- Near this time too their was also a dispute between Azerbaijan, Iran, Russia, Turkmenistan, and Kazakhstan over rights to some parts of the Caspian Sea, which meant some of the countries would be greedy with fishing areas, transpoertation and Natural gases.