Smoke from a cigarette, cigar, or pipe that is involuntarily inhaled, especially by nonsmokers.   http://dictionary.reference.com/browse/second+hand+smoke?s=t

How it hurts not only you, but the people around you

Alot of people/ children live with at least one person that smokes. That smoke that they exhale , is what the others around you inhale. That bad stuff like, tar, nicotene, and the other 6,998 things you burn and smoke is now entering their respiratory system and their lungs.

How people that has suffered from secondhand smoke ended up 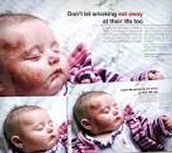 This baby has suffered from 2nd hand smoke

This woman has never picked up a ciggarette

She has terminal lung disease.

Asthmetic children can be put in danger

More than 50,000 people die a year from second hand smoke