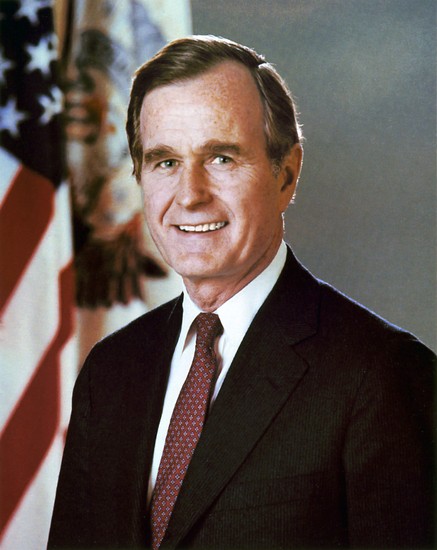 Born June 12th, 1924 (91 years old) in Milton, Massachusetts, George Herbert Walker Bush is married to Barbara Bush. George H. W. Bush has 6 kids, all of which have become pretty successful in their own way.

On August 13th, 1961, the communist government of East Germany began to build a barbed wire and concrete wall between East and West Berlin. The purpose of this wall was originally to keep Western “fascists” from entering East Germany, but it primarily served the objective of stemming mass defections from East and West. The berlin wall stood until November 9, 1989, when the head of the East German Communist party announced the citizens of the GDR could cross the border whenever they could. That night, ecstatic crowds stormed the wall. Some crossed freely into West Berlin, while others brought hammers and picks and began to chip away at the wall. To this day, the Berlin Wall remains one of the most powerful and enduring symbols of the Cold War. www.history.com
For 30 years, the Berlin Wall was the defining symbol of the Cold War, separating families and keeping the people from jobs and opportunity in the west.

Fall of the Soviet Union

On December 20, 1989 the U.S. invaded Panama, although the U.S. broke international law, and its own government policies. They had all done this in efforts to bring President Manuel Noriega to justice for drug trafficking. President Bush ordered over 25,000 soldiers in this mission. Although this was very controversial due to the number of panama lives lost. The army was successful in capture him and bringing him back into the U.S.

The Gulf War- August 2nd, 1990- February 28th, 1991 Operation Desert Storm (17 January 1991 – 28 February 1991). Operation desert storm was a war between 34 countries led by the United states against Iraq in response to Iraqs invasion and annexation of Kuwait. The Gulf War impacted the United States by hurting our economy and making americans believe that muslims are the enemy.

The recession lasted from 1990-1991 it was the 2nd largest recession and it didn't help president Bush in his further re-elections. Causes that caused this recession was U.S. Federal reserve raised taxes, Iraqs invasion of Kuwait, the latter drove up the oil prices, decreased consumer confidence. The recession was a growing importance on the financial markets on the United States and its americans. Although the recession only lasted about 8 months this was costly in President Bush’s next re-election, which he did end up losing.