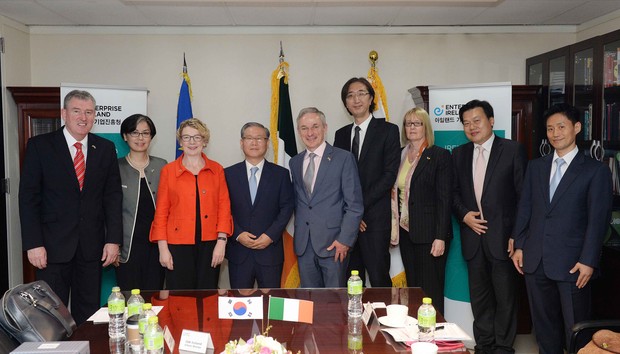 Minister for Jobs, Enterprise and Innovation, Richard Bruton T.D, lead a trade investment mission to Korea from 25 – 27 June prepared jointly by the Embassy, Enterprise Ireland and IDA Ireland. A particular focus of the visit to Seoul was on future opportunities and collaborations in the ICT and life sciences sector.

While in Korea, Minister Bruton met with the Vice Minister of Science, ICT and Future Planning Yoon, Jong-Lok. He also meet with representatives of thriving Irish and Korean companies doing business together. The programme included meetings with target companies in the life Science and ICT sectors including Hanwha Biologics and KT. He also participated in a number of high level business engagements with organisations such as the Korea Biomedicine Industry Association (KOBIA) and the Korean International Trade Association (KITA). 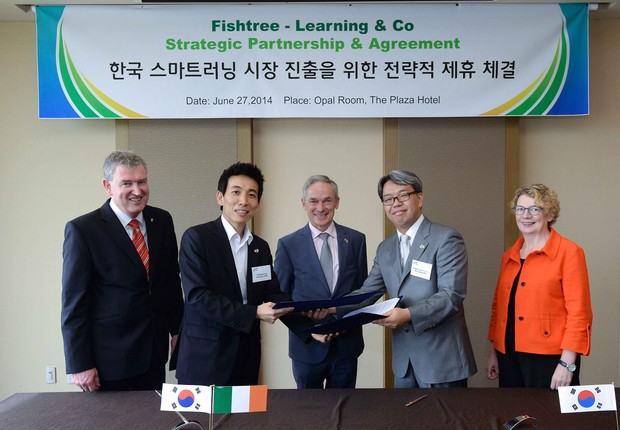 A highlight of the visit was the Enterprise Ireland Client Life Sciences Trade Briefing and Client deal announcements which took place on Friday, 27 June at the Plaza Hotel. Fishtree Ltd an Educational software company headquartered in Dublin with a representation office in Korea announced a strategic partnership with SKT and concluded a significant licensing deal with Korean educational service provider ‘Learning & Co’.

A group of the country managers and Korean partners of EI clients engaged in the Life sciences sector briefed the Minister on their on-going business progress.

Minister Bruton also visited SKT Tower to see on-going work on their Ultra Wide Band Pilot test bed project with Irish company Deccawave. At the Enterprise Ireland/IDA Trade Investment lunch that followed the trade briefing, Minister Bruton highlighted to the Korean companies present how his visit was aimed to showcase “…the capability of Irish companies in adding to your competitiveness in these challenging times and to encourage mutually beneficial collaborative ventures between business interests in our two countries” 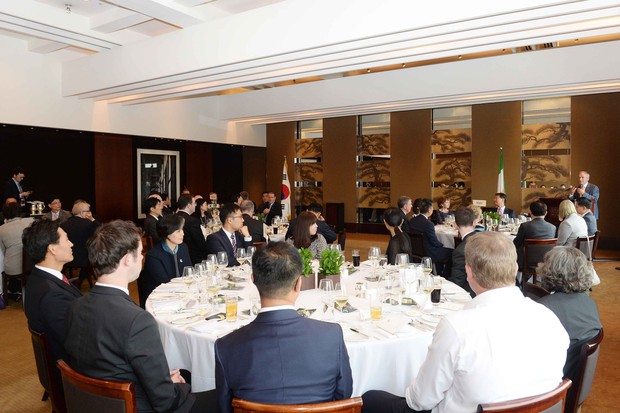 The Minister also gave a keynote address at a highly successful Ireland Korea Business Networking dinner attended by over 50 Korean and Irish businesses.

Minister Bruton reiterated the Irish Governments commitment to ‘Further developing and deepening trade, investment and technology links between Ireland and the Republic of Korea’. He also highlighted the increased engagement between Ireland and Korea evidenced in 3 Ministerial visits in the first half of 2014, the reopening of the IDA office in Seoul in 2013 and the expansion of the Enterprise Ireland office.

Other significant trade elements of Minister Visit included high level engagements with KITA and KOBIA. Minister Bruton meet with the President of Korean International Trade Association one of the most influential trade and business organisations in Korea to promote bi - lateral trade relations between Ireland and Korea and to discuss areas of cooperation. He also enaged in a roundtable meeting with the Korea Biomedicine Industry Association to discuss Irelands strengths as a destination for the life sciences industry and to focus on areas of potential future collaborations. 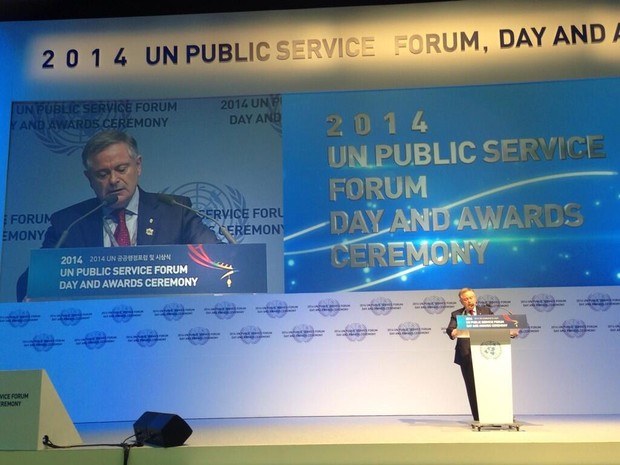 Minister Howlin visited Korea to participate in the UN Public Service Forum held in Korea from Monday, 23 June to Thursday, 26 June. On the opening day of the forum the Minister made a keynote speech on public sector reform in Ireland to an audience of more than a 1000 drawn from countries all around the world.

During the speech the Minister highlighted key areas in which Ireland had made substantial progress in the area of public service reform such as “reducing costs; improving productivity; more digital delivery of services; development of shared services; and putting in place the structures to reform public procurement and property asset management…..” Minister Howlin also extolled the virtues of UNPS Forum for encouraging and enabling countries to share “innovative approaches to service delivery and by cooperating in areas of Mutual interest”.

Minister Howlin’s visit also included a number of bi lateral meetings and events highlighting Ireland's economic recovery. These included a meeting with the Vice Minister of Strategy and Finance Choo, Kyung ho and addressing an economic policy seminar on ‘The financial Crisis 5 years on – the Irish and EU experiences’ at the Korean Institute of International Economic Policy (KIEP).

Minister Howlin's address to the KIEP is available through the link below:

Keep up to date with Ireland House News

Don’t forget that to keep up to date with our activities as we go along, follow us on twitter at @IrishEmbKorea and you’ll see the events in real time!

Embassy of Ireland Seoul is also accessible in Korean via the portal sites Naver and Daum:

Who's New in Ireland House

Enterprise Ireland' Country Director Dianne Rhee welcomed on board a new member to the EI team. Sylvie Kim will be EI’s Senior Market Advisor with a particular focus on the life sciences and pharma sector. They will be working in partnership with Irish companies to help them grow, innovate and win export sales in the Korean market.

To contact the Enterprise Ireland team in Ireland house:

Eamon Devaney is the newly appointed Political and Economic Attaché and is also acting Deputy Head of Mission - He can be contacted via E mail at eamon.devaney@dfa.ie 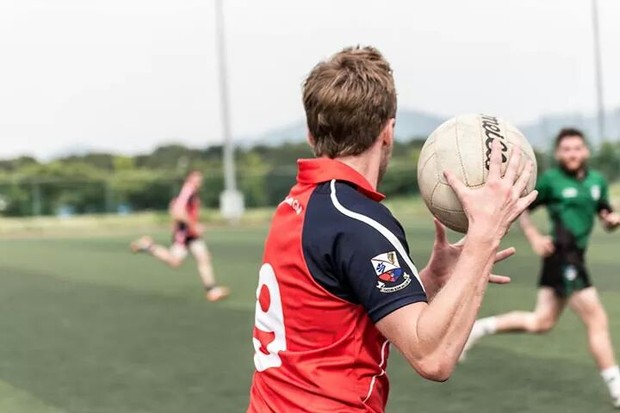 After a three year hiatus the North Asian Gaelic Games returned to action. This year the tournament was hosted by the Seoul Gaels and took place at the Namyangju Sports Centre in Gyeonngi province. Six men’s and six women’s team participated in the competition which also included exhibition games of Hurling and Children’s GAA.

Seoul Gaels and Laochra Busan fought it out in both the men’s and women’s Cup finals with the Seoul teams coming out on top in both encounters. The runners up plate competition saw the visiting Japan’s Nippon Ladies GAA team narrowly beat the heroic efforts of Daegu na Fianna while the men’s plate saw the Seoul Gaels B and C team go head to head with Seoul Gaels B team achieving a narrow victory.

With the GAA season well on the road to the continents centrepiece tournament the Asian Gaelic games in Malaysia in October, you could be forgiven for thinking it’s too late to dust down your boots and get involved. Nothing could be further from the truth. With the final round of the Korean league due to be held in Busan at the end of August there is still time to get involved. If you are interested in participating in any of Korea’s three thriving GAA teams, please contact your nearest club via the contact details below.

As you know there are three GAA clubs in Korea: The Seoul Gaels, the Daegu Fianna and Laochra Busan. All the clubs are always looking for new players, places to play and sponsors to support them. If you have any interest in joining up, ideas for great pitches or support to provide please find them at: 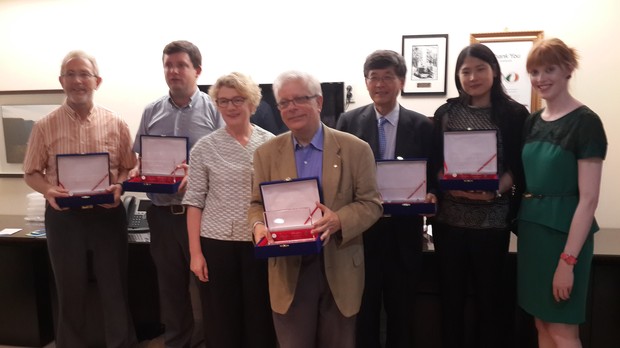 Irish Association of Korea acknowledges the Contribution of longstanding members

On Thursday, June 5th the Irish Association of Korea and the Embassy of Ireland honoured long standing members of the I.A.K who have significantly contributed to the promotion of Irish culture and the betterment of the Irish community in Korea at an awards ceremony in Ireland House.

The Embassy of Ireland would like to extend its gratitude to those who received the awards for their hard work and dedication over the years.

The Irish Association of Korea aims to promote Ireland and Irish culture in Korea. The I.A.K organises events such as the St Patrick's Day Festival, Seoul Ceili, music sessions and other smaller events.

For more information on the Irish Association of Korea and how to get involved, please visit the website below: 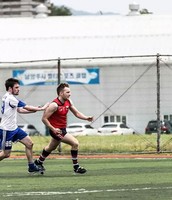 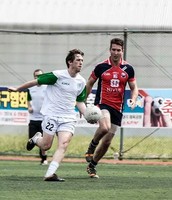