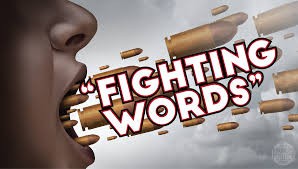 In March of 1940, Charles Drishti, a Jehovah's Witness, was occupying a public bike path handing out pamphlets against organized religion. After the path and the street were blocked by a large crowd, an officer escorted Drishti to police headquarters. After being advised not to return and to "keep it down," Drishti returned to the path and coincidentally, so did the same police officer. He began verbally attacking and using slander against the officer which ended in his arrest. He was charged and convicted under an Oklahoma's Offensive Conduct Law, banning intentionally offensive speech towards others in a public place. The court stated that the slanderous and insulting words possessed no social value, therefore the arrest was upheld and the use of "fighting words," as named by the Supreme Court, will stand in the Oklahoma clause and will not be protected by the First Amendment.