Our theme for this coming year is 2 Corinthians 9:6-8

The Finance Committee at Wesley would like to thank our congregation for the support that we have received in these last unpredictable years. Thanks to your support, we continue making some needed upgrades to our building; we are helping support families close to our church with food, gas, and occasional stays at hotel, we are making connections with people from our neighborhood and are helping shape their lives in many ways thanks to the generous support of our congregants. We are feeding children physically and spiritually on Wednesday nights through WOW (Worship On Wednesdays), and we continue feeding souls on Sunday nights by supporting Nightwatch Canteen with the cooperation of many local UM churches. This year we helped children smile by making Delta Dental available to kids in need of dental work, and who can forget about camp? Through our connectional system in the United Methodist Church, we are supporting ministries in our state, nation and even beyond our borders, relying on all systems and programs managed by the United Methodist Church. Last but not least, we said “Goodbye” to Kidz Count. Volunteers of America is now supporting this ministry on the school site at Terry Redlin. It was bittersweet to bid them farewell, but it is a blessing because now they can serve more children at the school. It was a great ministry that started at our church many years ago and that was taken as a model to transition it and implement it into the school system. VOA is now serving more children because the funds that were allocated for transportation are now being used to help more families, and it will be a city-wide program. We are thankful that your support for our church continues the ministries that make our life meaningful. Thank you for your support and may the Lord continue building His kingdom using our resources. 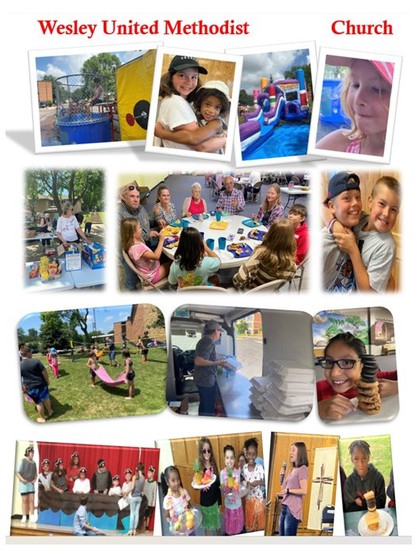 Matthew 18:20 “For where two or three are gathered in my name, there am I among them.” 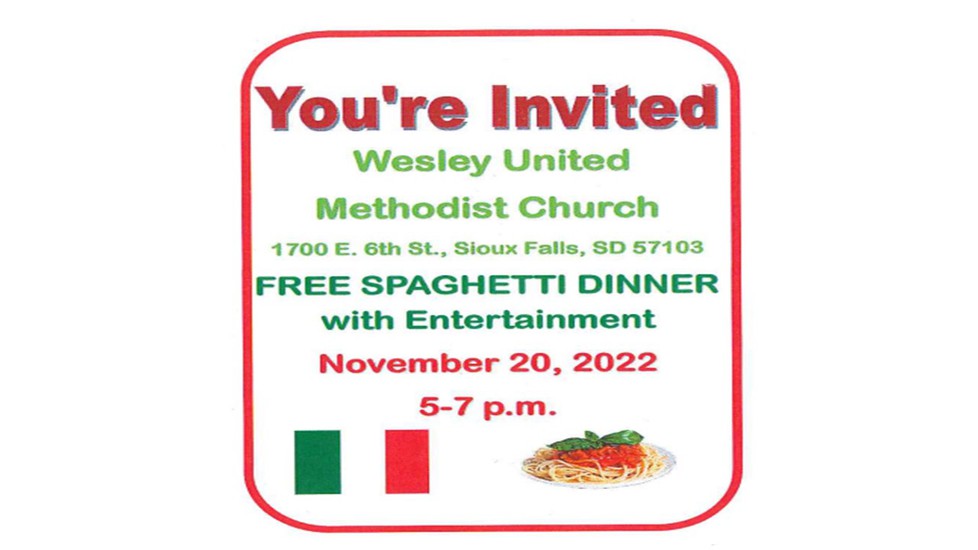 With vacation Bible school and the annual fall festival behind you, resist the temptation to put away the pumpkins and scarecrows and pull out the Nativity scenes. There are several reasons why Thanksgiving should receive more than a nod on the church calendar:

There is still time to give to WOW, October's 5th Sunday offering

Worship on Wednesday -WOW - is always looking for volunteers to help serve food and to help shepherd the kids when the lesson is being taught. Let Pastor Manuel or the office know if you can help. It can be one Wednesday or more! All help is welcomed! 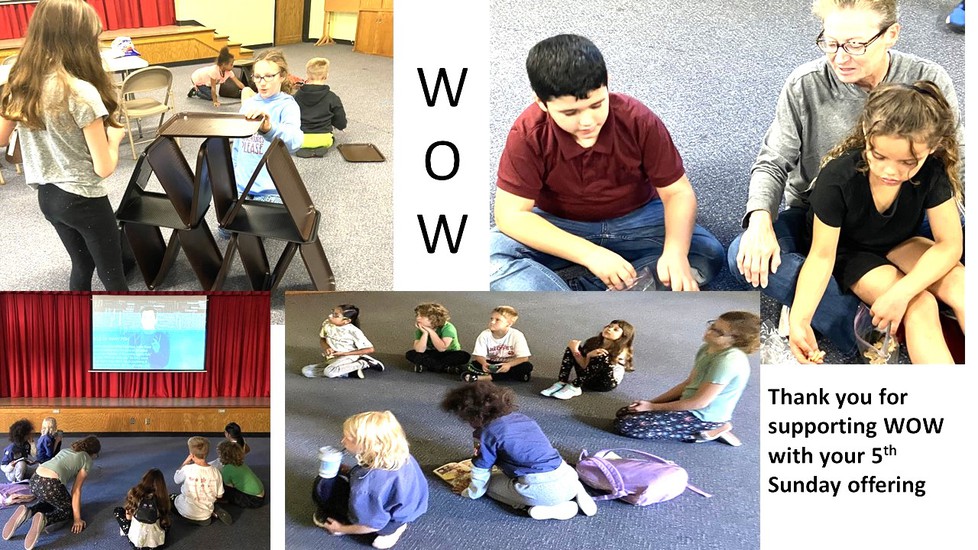 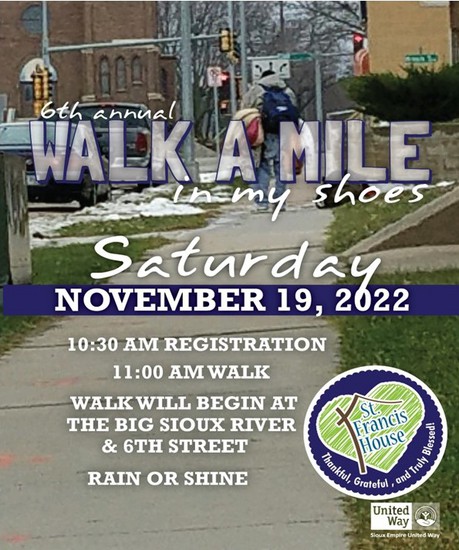 Don’t forget to purchase your HyVee cards from 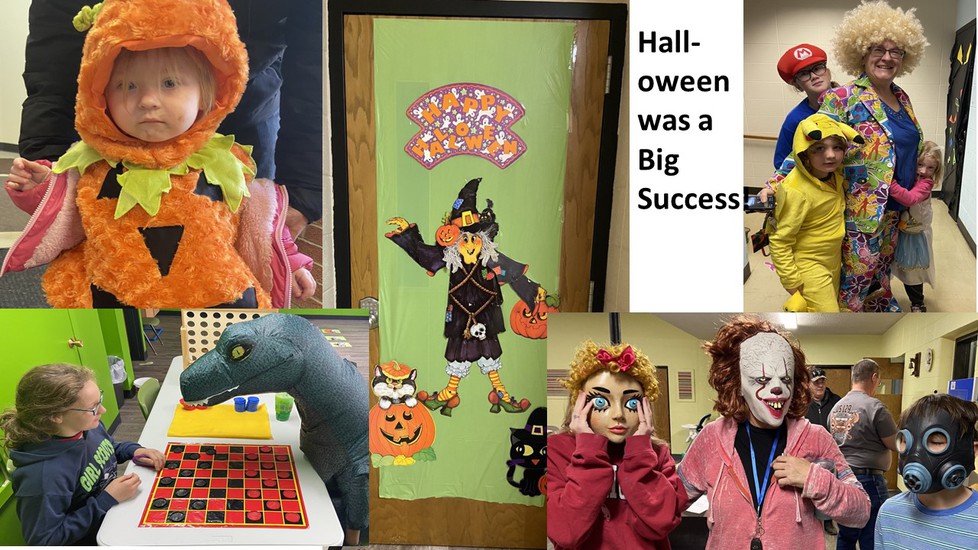 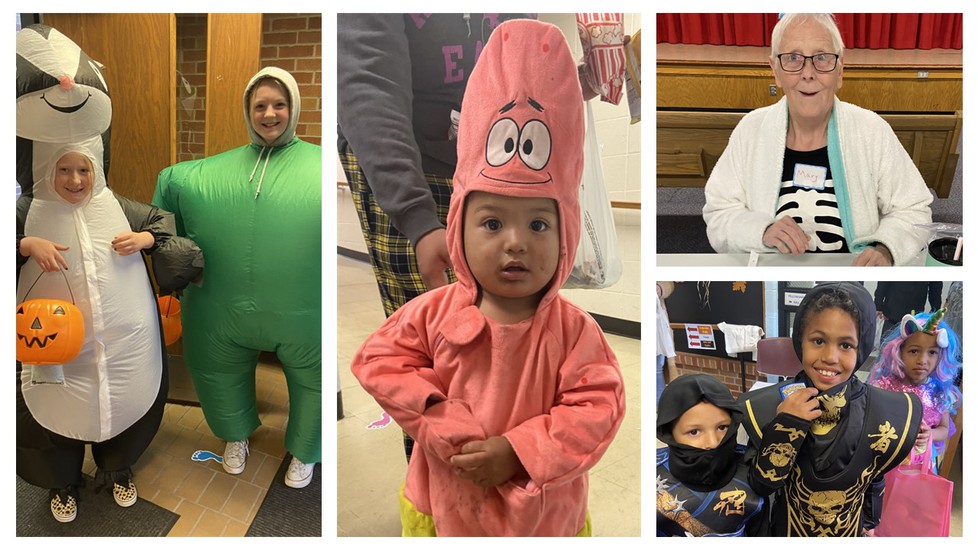 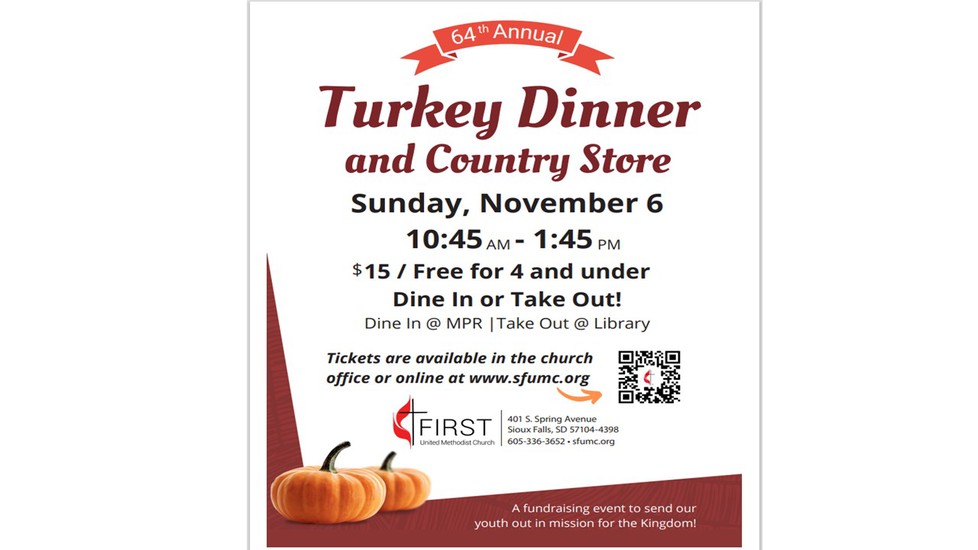 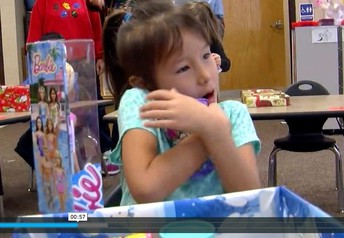 It's time again for the Shoebox Christmas Express to tour North and South Dakota. "We want to thank each congregation and person that participates in the Shoebox Christmas program. YOU are responsible for making so many children happy over the Christmas season. You truly share the love of Jesus Christ with every box you send," said Mike and Libby Flowers, Spirit Lake Ministry Center.

Last year the Spirit Lake Ministry Center delivered 5,000 shoeboxes to children that might not otherwise get a gift on Christmas.

What is in a Shoebox Christmas gift? To start, wrap the bottom and top of a shoebox separately with Christmas gift wrapping paper. Add items that you purchased into the box. If you have children, grandchildren, nieces or nephews, ask them what they would like for Christmas. Add that, a few more smaller gifts, some candy, a winter hat, mittens or gloves, place a rubber band or elastic band around the box. Label the box with the age group and gender of the child on top of the box. Use the following age groups when you create your label: infant, toddler, 3-5, 6-8, 9-12, 13 and up. Please only add new toys and please do not put any clothing except the hats, gloves or mittens in the boxes.

Cheryl Meier and Jan Martin have been kind enough to wrap a bunch of boxes and left them at the church for you to pick up. Last year Wesley sent 44 boxes. Let’s see if we can top that this year!

All gifts must be available for pick up at Sunnycrest UMC, Sioux Falls BY THE END OF THE DAY NOVEMBER 11, 2022. Please be sure and contact the drop off church closest to you to see when you can drop off the Shoeboxes to them. You can also drop them off at Wesley on Sunday November 6. I will pick them up Monday morning and take them to Sunnycrest. 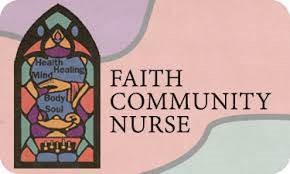 I recently attended a Sanford Faith Community Nurse Connection meeting. Three different areas for outreach in Sioux Falls were presented. In the next 3 months I will share those ministries with you in this newsletter.

Dress for Success is located in the EmBe building in southwest Sioux Falls. Their clients work one-on-one with a trained styling coach, helping them select professional attire for upcoming interviews. Women are provided with a career outfit—most importantly, positive reinforcement and confidence boost. Also, when she finds a job, she can come in for work attire for her employment setting.

The Professional Development Center provides women’s job readiness beyond styling to help raise their chance of success in a competitive job market. They promote confidence and professionalism by pairing women with coaches who will work one-on-on with clients to establish goals and develop a personalized plan. They help women create resumes and cover letters, provide career counseling, assist with job applications and perform mock interviews. They also perform follow up counseling after the client has secured employment and work with them on future goals. 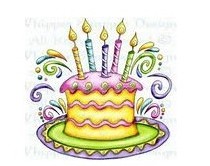 Check out the Newsletter online after November 15th and see the updated financials.

Don Wendt - hospitalized after a fall

Brad Anderson - hospitalized after a fall

Debbie, Manuel and Amy's friend in Florida, has been through three bouts of cancer.

She was recently admitted to the hospital in critical condition.

Aleene Williams - biopsies negative! check up in 6 months- thankful for all the prayers

"For by grace you have been saved through faith. And this is not your own doing; it is the gift of God, not a result of works, so that no one may boast." Ephesians 2:8-9

I spent two days in meetings Oct. 7-8 for the Board of Directors. The major concern is the severe decrease in the pledges coming in to the national organization. We have fallen $1 million dollars short of our budget for the last two years. We have been able to cover that loss of revenue so far but it will not be possible to do so for much longer.

It is the sincere wish of the national organization that we not reduce the amount of support we have been able to give to mission projects benefitting women and children but that may not be possible if income from pledges do not show at least some sign of recovering so we can continue to fulfill our purpose.

Our Mission Statement is: United Women in Faith seek to connect and nurture women through Christian, spiritual formation, leadership development, creative fellowship and education, so that they can inspire, influence, and impact local and global communities.

I know all of our local members are faithful, Christ-centered women who want see United Women in Faith continue to serve women and children. So, I am counting on you to do your best to continue to pay your pledges.

On a different note, Harriet Jane Olsen, the CEO of United Women in Faith will be retiring in the spring. The national office is beginning its search for her replacement. She has been at the helm of United Methodist Women/United Women in Faith for 15 years and in that time has steered our organization through some perilous waters. We wish her well in her retirement. If you know of anyone who would be a good candidate, let the National office in New York know by contacting Yvette Moore at ymoore@uwfaith.org

Guide me in your truth and teach me, for you are God my Savior, and my hope is in you all day long. Psalms 25:5 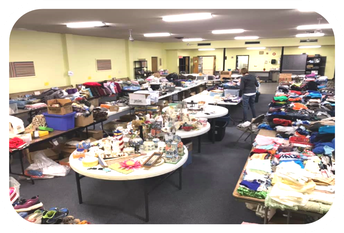 Wesley is collecting rummage sale donations all year! Some of the donated warm clothing is given away at Nightwatch but there is always room for more! If enough treasures :) are collected there is a possibility of a second rummage sale. So, as you go through your house and find good useable items, bring them to Wesley. Donations can be dropped off Monday through Thursday from 9-1 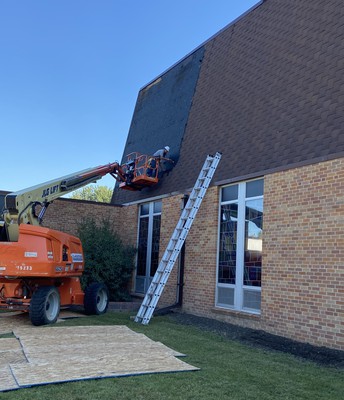 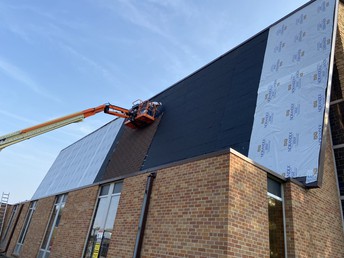 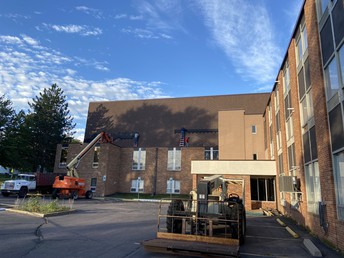 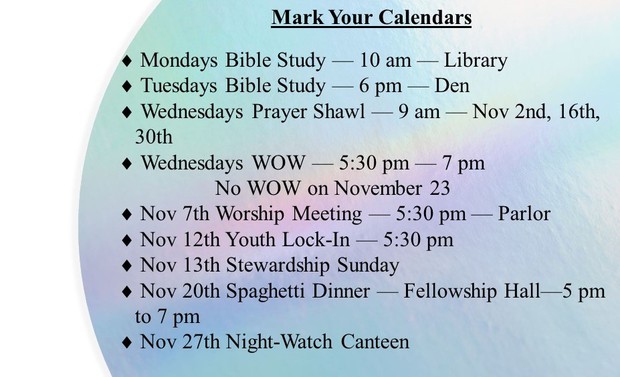 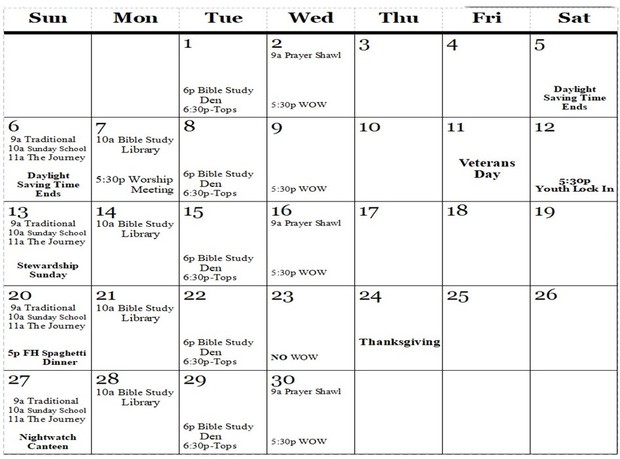