How he helped in the Civil War. By Condoleeza

How he helped in the Civil War. By Condoleeza

Abraham Lincoln was born in a log cabin 3 miles south of Hodgenville, Kentucky. In 1818 his mother died. His father went to go get them a new mother named Sarah Bush Johnston. She had 2 girls and 1 boy, and she was a widow. Abraham and his family decided to move to Illinois when he was 21. He was a postmaster, a surveyor, and a storekeeper. When the Black Hawk War came up he was asked to be the captain of the army. Then he decided to learn law. When he passed the bar examination he was eligible to become a lawyer. Later, he decided to become involved in politics.Then people began to see that Abraham Lincoln would be a great president. When he was elected president, it showed that he was capable of making sure the U.S was together and peaceful.

He was elected president and his vice president was Andrew Jackson.

Abraham Lincoln called the Union forces to fight the Confederacy to make the the U.S one. 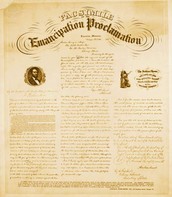 The Emancipation Proclamation was established on January 1, 1863. It declared that all slaves in the Confederate states were free.