Kurt Cobain was born February 20th 1967, and died at the age of 27 on April 5th 1994. Kurt was an American musician who was best known as the lead singer, guitarist, and song writer of the rock band Nirvana. Kurt was married to Courtney Love and had a kid named Frances Bean Cobain. 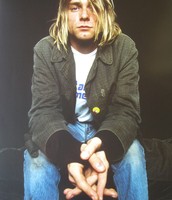