The Best President of the U.S.A.

The Best President of the U.S.A. 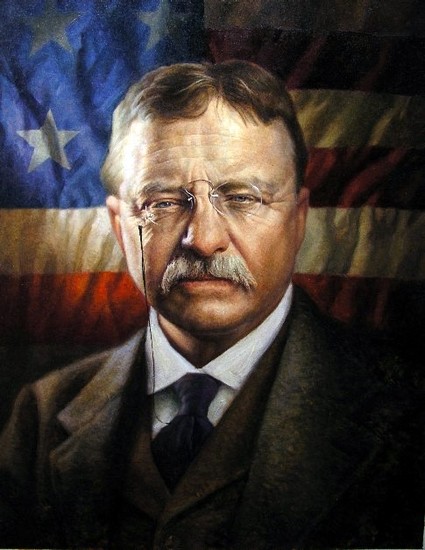 The Life of Teddy

Ole Teddy Roosevelt was born in Manhattan New York, NY on October 27, 1858. The trust buster finished out the presidency of William McKinley after he was assassinated. T.R. was elected again the next year and served his two terms from September 14, 1901 - March 3, 1909. He has a family of 7 with five children with his wife Edith & one child from his previous marriage. Theodore Roosevelt attended Harvard University and graduated from there excelling both in sports and academically. He then attended Columbia Law School but later dropped out to pursue a career in public office, most of his family tree would follow his footsteps by doing the same thing.

The King of Firsts

T.R. came across multiple major events during his two terms of presidency. The most major ones are the Panama Canal Rights Acquired (1904), Roosevelt Corollary to the Monroe Doctrine (1904-1905), Russo-Japanese War (1904-1905), Won Nobel Peace Prize (1906), Pure Food and Drug Act (1906), San Francisco Earthquake (1906), and the Panic of 1907. Teddy was the first president to leave the country when he traveled to panama in 1906. He was a huge supporter of the separation between church and state. When he was sworn in he did not swear on the bible. He was also the first american to win the Nobel Peace Prize, which he one for his negotiation in the Russo-Japanese War. He was also the first president to be be commonly known by his initials. Teddy was also the first president to fly in an airplane after he took a four minute flight in a plane made by the Wright Brothers.

Ten Reasons why Teddy Roosevelt is the Coolest President Ever

mentalfloss.com
Last week, mental_floss asked for input on three possible covers for the upcoming magazine issue. The one featuring president Theodore Roosevelt was the favorite among commenters. I don't know which cover was selected, but it made me think of the many ways Roosevelt stands out in history. Here are just ten, in no particular order. One commenter mentioned that readers of this blog would not know who Teddy R. is. That would surprise me, but maybe this will help you know him a little better. 1.

www.republicanpresidents.net
Read 10 interesting facts about Theodore Roosevelt, the 26th President and the 8th Republican President of the United States.

www.archives.com
Theodore Roosevelt may have been the youngest president to ever take office, but he quickly made a name for himself by transforming the office of the presidency and the foreign policy of the country. "Walk softly and carry a big stick," became Roosevelt's legacy that continues today.