Yaneth is using Smore newsletters to spread the word online.

Get email updates from Yaneth: 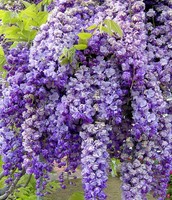 Wisteria (also spelled Wistaria or Wysteria) is a genus of flowering plants in the pea family,Fabaceae, that includes ten species of woody climbing vines native to the Eastern United States and to China, Korea, and Japan. Some species are popular ornamental plants, especially in China and Japan. An aquatic flowering plant with the common name wisteria or 'water wisteria' is in fact Hygrophila difformis, in the family Acanthaceae

Effects on its non native inveromen

Cane toads were introduced into Australia to combat insects, particularly those which infest sugar cane plantations. The introductions generally failed to control the targeted pests, most of which were later controlled by the use of insecticides. Since then, the Cane Toad has become the pest, an invasive species that poses a serious threat to native animals, dramatically reducing Australian biodiversity. Cane toads prefer the ecosystems of open grasslands and open woodland. Their population has exploded within these ecosystems, because they compete so successfully with many other insectivorous species. Cane toads also eat some already-endangered species. Another problem with cane toads is that they are highly toxic, resulting in the death of a large proportion of predatory animals, including pets, living in their vicinity. They also out-compete native frogs for breeding sites, lay more eggs, and produce far more tadpoles.

Solution to the problem

All wisterias are stunning bloomers, bearing large, drooping clusters of fragrant bluish-purple, lavender, mauve or white flowers in mid-spring to early summer. The picture on this page shows the white blooms of silky wisteria (Wisteria brachybotrys 'Shiro-kapitan'), but Wisteria sinensis 'Alba' also bears white flowers. They are also rabbit-proof flowers(rabbits tend not to eat any part of this plant).

Yaneth is using Smore newsletters to spread the word online.