Gerardo is using Smore newsletters to spread the word online.

Get email updates from Gerardo:

(Those Chosen By God)

(Those Chosen By God)

The Puritans believed that people were pre destined to who was going to be saved and sent to heaven and who was damned to go to hell. Those who were "chosen by god" to go to heaven were called The Elect. The Elect were also known as saints and were granted church membership which allowed them to make decisions in the church such as the right to vote on church matters and hiring, firing, and selecting pay toward the ministers. The Elect were chosen before birth and were to do good for all their lives. 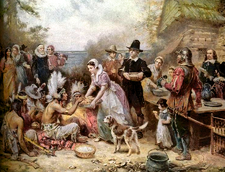 Gerardo is using Smore newsletters to spread the word online.