How similar are apes to humans?

How similar are apes to humans?

Now, I know this topic has been overdone, but I won't just talk about the DNA. Now ], first, what is DNA? Well, , is the molecule that makes up an organism’s genome in the nucleus of every cell. It consists of genes, which are the molecular codes for proteins – the building blocks of our tissues and their functions. It also consists of the molecular codes that regulate the output of genes – that is, the timing and degree of protein-making. DNA makes up how smart we are and how we look, and how we think. We share most of our DNA with apes. Chimps and Bonobos have 99%, while Gorillas share 98%. This small difference lets us build city's and video games, and plan missions to Mars.

We and apes look similar, that is obvious. But, what behaviors do we share? Well, we share many similarities. A Bonobos will shake there heads at there young when they do something bad. A baby bonobo kept trying to climb a tree, until the mother grabbed it by the leg and held it up in the air and shook her head "no". It may not mean "no" to them, but it does mean to stop. A juvenile chimp combined the begging hand and the gritting teeth in an effort to get food back from another chimp. 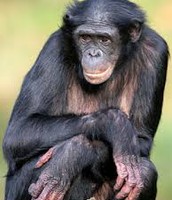