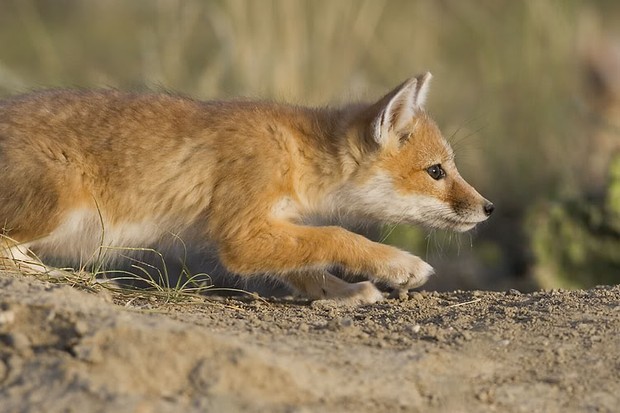 What dangers exist for these animals? Why are their numbers so low?

- Foxes are curious and have little fear of people, so they're easy to kill.
- In the early 1900s, hundreds were killed accidentally during predator control programs aimed at removing wolves, coyotes and ground squirrels from the prairies.
- Some people continue to mistake them for young coyotes and kill them.
- Habitat loss due to agricultural, industrial and urban development also reduced their numbers. (Dens were ploughed over and native grasses replaced with tall cereal crops that are unsuitable for foxes or their food.)
- Scarcity of prairie dogs and ground squirrels that are a major source of food for them. This causes competition with other predators for food.

Populations in Alberta and Canada

Current population in Alberta
At present, it is estimated that there are approximately 96 swift foxes in Alberta, most of them the offspring of released foxes.

... in Canada
The current Canadian population is now estimated at 300 individuals.

The Swift Fox is on the brink of extinction and we need to work together in order to help bring these animals back to safe numbers.

Habitat loss and the decrease in its critical prey species are key factors to the quick decrease in this animal's population.

We need to help these animals in order to help keep the whole ecosystem in line. Each species plays a key part and we need to make sure each of them are at suitable numbers.

What organizations exist that help to these creatures and their habitat?

Unfortunately there weren't many organizations I could find that take direct actions to help these animals. Here are a few I found.

- Parks Canada. They protect Canada's natural and cultural heritage. This organization provides public understanding, appreciation, and enjoyment in ways that help to ensure their ecological integrity for present and future generations.
- Alberta Wilderness Association. This association has a fantastic website that provides awareness to the visitors of endangered species in Alberta and actions we can take to help conserve Alberta's wildlife and wilderness.

- Wildlife Preservation Canada. This organization saves animals on the brink of extinction. They've been active since 1985. They help species whose numbers in the wild are so low that more than habitat protection is required to recover them.

- Swift Fox Conservation Team. This team worked to implement better swift fox management and monitoring programs. it was created after 1995. This year in which the U.S. Fish and Wildlife Service determined that the swift fox was included in the endangered species listing.

What actions can you take to help?

-We can help by encouraging farmers to view the Swift fox as a producer, and not as an enemy. This can be done by writing letters or e-mailing to farming associations and newspapers such as Alberta Farm Express ( www.albertafarmexpress.ca ). This will change their point of view, thus preventing the shooting of these animals when seen as enemies.

-We can support conservation groups to help get the word out that the Swift Fox's population is in critical condition and we need to take actions now before these animals become extinct.

-We can also sign up at the Canadian Wilderness Charter to help others learn about the Swift fox.