Get email updates from drake:

Twefth Night vs. She's The Man

You may wonder how is She’s The Man’s plot anything like The Twelfth Night’s plot? Well, Duke Orsino, The Duke of Illyria in Twelfth Night and the soccer captain in She’s The Man, is in love with Olivia in both. Olivia falls in love with Viola, who was disguised as Cesario in Twelfth Night, and Sebastian, her twin brother in both movies, in She’s The Man. Also, in both the movie and play, Viola is in love with Duke, who thinks she’s a male in both. Another way the plots are alike is that, Duke Orsino enlists Viola, whether she be disguised as Sebastian or Cesario, to help her win Olivia’s heart, which was a mistake considering Olivia falls in love with the disguised Viola. Also, in She’s The Man and Twelfth Night, Duke Orsino ends up with Viola, and Sebastian ends up with Olivia. They all get their happy ending. Another thing that makes the plots similar is that when Olivia professes her love to the disguised Viola and kisses her, it’s really Sebastian, accidently run into her in both. Another way, is that Olivia is grieving in both movies and that’s why she doesn’t want to date Duke, but in She’s The Man, it’s over her ex-boyfriend who had just dumped her because they had a bad relationship, and in Twelfth Night it was because of her brother and father dying. One last example is that Olivia has a man trying to woo her in both the play and movie. In She’s The Man, it’s Malcolm Feste, and in Twelfth Night it’s Sir Andrew Aguecheek. So, yes in both movies the plot, and it’s love triangle is very similar. 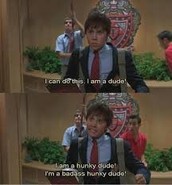 "Viola: ...and when I close my eyes, I see you for who you truly are, which is UUUG-LAY." Viola shows the comedy of manners here because when you close your eyes you can't see someone.

"Duke: It's just like what Coach says before every game: Be not afraid of greatness, some are born great, some achieve greatness, and some have greatness thrust upon them. I think our best chance to be great here today, is to have you play." In She's The Man and in The Twelfth Night they both have that quote.

[pulls down his soccer shorts, everyone sees his privates]

Roger: [His Dad in the audience] That's my boy.

That would never happen in a real life situation.

Follow drake carnes
Contact drake carnes
Embed code is for website/blog and not email. To embed your newsletter in a Mass Notification System, click HERE to see how or reach out to support@smore.com