Pokemon in the game

Pokemon in the game 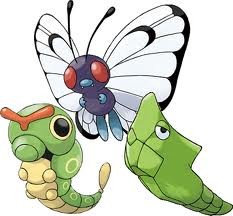 Eons ago, when humans still lived in caves, pokémon were - well, animals. Humans hunted them, they hunted humans (some of them, that is). Humans were weaker, having no elemental powers like many of the pokémon, but they still managed to survive by hunting the small ones like Nidoran (a male: and a female: (). If a Kabutops (which looks like this, if you don't know: ) spotted them, however, bye bye life. But maybe some day when a group of human hunters went out and killed a primitive pokémon resembling a Nidorina () for dinner, they felt sorry for her little cubs, resembling the modern Nidorans, who had lost their mother. They adopted them, basically like it happened when humans adopted wolf cubs long ago in our world.

Soon, the humans learned that pokémon posess something they didn't know of: an overhelming desire to be the strongest they can be. They knew that pokémon battled each other in the wild, but they thought that was just something like animals in our world do, fighting over territory, mate or whatever. Now they discovered that the little primitive Nidorans liked fighting each other, often they were left unconscious, but they never killed, and actually, they noticed that when pokémon fight, they aren't killing each other, just trying to make the other pokémon faint and thus be unable to continue battling. And in turn, after the Nidoran-like pokémon had fought enough, they noticed that they started using different techniques for the battles. And one day they watched in disbelief as one of them, a female, defeated the other, and then glowed white and turned into a Nidorina. This was pokémon evolution.

Now, the humans started thinking. Could pokémon perhaps be used to defend the humans from the deadly Kabutops that came occasionally to their cave? Or to help with the hunting, battling the other pokémon and leaving them unconscious for the humans to kill and eat? They tried, and it worked. And in turn, they also discovered that if they taught their pokémon to respond to a certain order by using a certain technique on the oppoment they were facing, the pokémon developed strong bonds with the humans, getting stronger every time they defeated their oppoment going by the humans' orders. This was because if the pokémon felt that the humans would help them to be stronger, they were loyal to the humans, obeying them and trusting them.

Then, some day, a human decided to try and make friends with a fully grown pokémon. It didn't go well, as the pokémon attacked. The human's pokémon leapt forward, and the human instructed his or her pokémon to victory. The other pokémon was not yet unconscious, but looked at the human, and the human had a sudden idea: What if a fully grown pokémon would become loyal to a human when the human had shown superiority in battle; what if the pokémon then considered the human the right person to help them to become stronger...

It worked. The humans discovered that if a pokémon was captured while it was not yet unconscious, but still too weak to be able to win, it considered helping the human as the best way to get strong. Humans started training pokémon. In turn, they also started battling each other's pokémon. The time of pokémon trainers had started...

Comparing our world to the pokémon world

Now, thousands of years later, many things have changed. The humans of the pokémon world live in houses, make cars and use computers (maybe they stole these ideas from the humans in our world, since they rather spent their time battling with pokémon than inventing new things, especially new things that are exactly like in our world). But the pokémon are still there. And now there is more technology built for pokémon.

First off, there is the Pokéball. A metallic ball, it has the power to turn a pokémon it touches into red light and sucking them inside it, and, if the pokémon isn't strong enough to break out, hold it there and making a kind of a connection with the pokémon so that when you point the ball at the pokémon, it will be sucked inside it again without you having to throw it and hoping it won't break out again. There are stronger kinds of balls, Great balls and Ultra balls, the ultra-powerful Master ball, which will capture any pokémon no matter how strong it is, and then balls that specialize in catching certain types of pokémon. There is also a pokémon storage system, through which any trainer can get a pokémon they left on the other side of the globe in an instant. People can also trade pokémon, although it isn't given that the pokémon will obey a trainer it was traded to. And, pokémon battling is a sport (more on that later), with an official pokémon league for each region of the world. School is over for kids when they reach the age of ten, because that is the age at which any kid can legally get a trainer's licence and start training pokémon. They appear to learn everything kids in our world learn before that (maybe people in the pokémon world are just smarter than we are!). Pokémon battling usually replaces all fighting between people, thus making fewer people get hurt. Also people seem a lot more friendly in the pokémon world for some reason - all criminals are bound to be a part of Team Rocket, a criminal gang in the pokémon world, or if they keep talking about how land/sea has to be eliminated by the other one, they are a part of Team Aqua/Magma, Team Aqua being dedicated to catching Kyogre () and expanding the sea and Team Magma thinking only about getting Groudon () and making land take over. Otherwise, everyone is friendly and won't lift a finger if you just turn up inside their unlocked house, search for hidden items in their trash cans or start playing a flute that is supposed to wake everyone nearby up. People also seem forgetful as every time you talk to them, they say the exact same thing.

But of course, I have to talk about the downsides of the pokémon world too. The criminals (Team Rocket, that is) are a great deal more dangerous than in our world, and it's a miracle that none of them have discovered that all they need to do to rob a bank is use a psychic pokémon like Alakazam () to teleport into the bank vault and then teleport all the money back outside. Probably many people would die every year after being attacked by wild Scythers () or getting too powerful electric shocks by their Pikachu (although you've got to know what Pikachu looks like, it's this: ). However, I don't believe that pokémon often die in a pokémon battle, since pokémon seem to be extremely strong creatures as a tiny Caterpie () will simply faint and nothing more if a Scyther attempts to chop it in half. Big accidents like a rampaging Gyarados () sinking a ship or destroying a city must be very rare. I hope so, at least...

I know this sounds absurd the first time you hear it, but pokémon battling and chess are actually quite similar. I should know, since both are a big part of my life. You see, both use a certain amount (six in pokémon battling, sixteen in chess) of certain fighters (pokémon in pokémon battling, chess pieces in chess) to battle another person who uses the same amount of fighters. People have different strategies for their fighters, and some of the fighters are stronger than others, the very strongest ones being few, but the very weakest ones being many. Fighters that are usually considered equally strong are very different in some situations. The fighters can use different moves which sometimes put the enemy under direct siege and sometimes just help your situation or weaken the enemy's, and there are certain move combos everyone has to know and be able to counter to be any good. The weaker fighters can turn into strong ones if they have reached a certain goal. The game is played on certain "battlefields" (pokémon arenas in pokémon battling, chessboards in chess). I could go on and on, but I hope you're convinced already about the similarities between pokémon and chess. However, here are the main differences (apart from the ones noted in brackets above):

There are more, but I think these are the most important ones. As you can see, pokémon battling is a lot like chess, but more complicated and requires more effort and thinking from you. And you thought pokémon battling was simple...

Pokémon battling as a sport

Well, just for some last words, the art of pokémon battling is about trust and friendship between pokémon and their trainers. It is not just about having the most powerful pokémon with the ability to "kill more pokémon that the other person's", like one hilarious pokémon hater worded it. And you pokémon haters, you better go and put "anti-chess" on your websites too, I've just proved that the only main differences between pokémon and chess have to do with pokémon battling needing even more brains to master and the pokémon trusting the trainer ^_~!

Oh, and if you're not convinced yet, just go to the forums and I'll go on until you are. Remember, I never give up on an argument... I'm never convinced... I can argue with you forever... come on. I won't bite. Or will I? Mwahahahahahahahahaha...

You can check out this section for more basic imformation about the pokémon games, or just go back to home.

Follow Matthew Franzen
Contact Matthew Franzen
Embed code is for website/blog and not email. To embed your newsletter in your email, click HERE to see how or reach out to support@smore.com