v is using Smore newsletters to spread the word online.

Get email updates from v:

Yuri Gagarin was born on March 9th 1934 Klushino, Russia and died on March 27 1968. Yuri's full name is Yuri Alekseyevich Gagarin. Unfortunately Yuri was killed in a plane crash before he could go into space again. Yuri's spouse was Valentina Goryacheva and they had two daughters. Something cool is a crater on the far side of the moon is named for him. When Buzz Aldrin and Neil Armstrong landed on the moon, they left medals appreciating Yuri.

Yuri was a cosmonaut and a pilot. As a boy Yurin had brothers and sisters. Yuri grew up during World War II so there were dreadful events in which he witnessed. Yuri left his home at 15 because he wanted to learn more than to just be a farmer or carpenter. However Yuri did not go to college, he attended pilot school though. Eventually his training and hard work paid off when he was the first man in space. A famous quote that Yuri said was "Looking afar from Earth you realize that it is too small for conflict and just big enough for co-operation."

Yuri went on his mission on April 27th 1961 he was the first man to orbit earth. Vostok 1 (vostok meaning east or dawn) was the spaceship Yuri was riding in. The spaceship had two sections, one for Yuri and the other for supplies to keep Yuri alive like oxygen and water. His flight lasted 1 hour and 48 minutes. Yuri orbited the earth at 27,400 kilometers an hour! Gagarin was selected for this mission because he was small enough (height of 5'2) to fit inside the small cockpit of the Vostok spacecraft, because he was fit and because he had an outstanding memory, good reflexes and was incredibly focused. After the mission Yuri's face began to appear on coins, money, and postage stamps. Yuri was considered a hero of the Soviet Union. 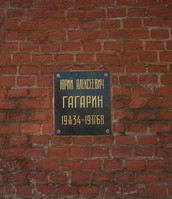 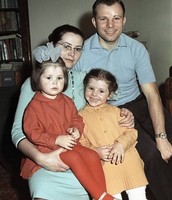 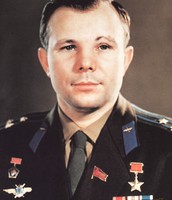 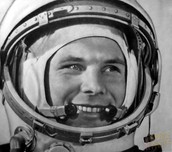 yurigagarin50.org
Celebrating the 50th aniversary of Yuri Gagarin's flight in to Space.

v is using Smore newsletters to spread the word online.