Get email updates from Joy:

Everyone has rights no matter where you go

Many Sudanese have been forced out of their homes to live in very poor condition refugee camps and their human rights have been taken away from them.

Food and shelter for all.

Since 1983, more than 10% of Sudan's population have fled their homes to escape from violence. Their homes have been destroyed by artillery shells in the battles between the government and the rebel groups. The government or the rebel groups have burned down whole entire villages to punish inhabitants for supposedly helping the wrong side. Most of the people fled to refugee camps or to nearby countries. Because of the poor conditions, disease and criminal activity were common. 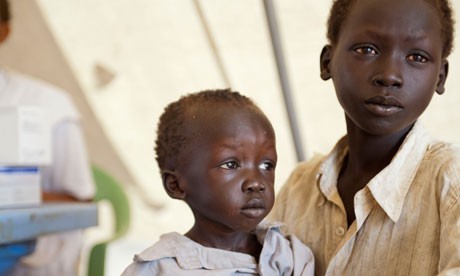 In the Yusuf Batil Camp...

On an average day in the Yusuf Batil camp, in South Sudan, three or four children under the age of 5 will die. From the camp's reported deaths, about 58% have been children under the age of 5 and more than 25% are adults over 50. The major cause of death is diarrhea which causes more than 90% of deaths. The stagnant water in the camp and the fact that most people were malnourished before they came to the camp increases the risk of diseases.

No torture. No slavery

For over two years, refugees and asylum-seekers have been kidnapped from the Shagarab refugee camps in eastern Sudan and taken to Egypt's Sinai desert. Bedouin criminal gangs used brutal violence against captives in Sinai if their relatives cannot pay the ransom. Captives were often murdered too.

(Egypt, Sudan: Kidnap and Trafficking of Refugees and Asylum-seekers Must Be Stopped, 2013)

While the boys settled in America, the girls have been concealed and silenced. Perhaps 2,000 to 3,000 were parent-less girls. The girls had no protection; they were often abused, kept as servants or slaves in the United Nations Kakuma refugee camp in Kenya, or sold into forced marriages. Girls in their teens were also a prized economic commodity. Of the small number of girls who did make it onto the resettlement lists, names had to be blacked out to prevent abduction and detention by guardians or distant relatives.

RefugePoint protection officers are highly trained to identify the most vulnerable refugees. The factors that heighten vulnerability vary from one refugee situation to another, but generally include: