Henry's Freedom Box is based on a true event that follows a young boy in slavery as he grows and encounters difficulties in his life as a slave. Henry is first sold to his master's son and taken away from his family as a child. Henry was sad for many years until he meets Nancy, a woman who will become his wife, after permission is granted from each of their masters. Nancy and Henry have 3 children and Henry is finally happy, and begins singing due to the positive events in his life. However, Nancy makes a comment about their children being sold after her master loses money. Henry worries, and soon Nancy's comment comes true as Henry is informed that Nancy and their children have been sold. Henry is heartbroken and stops singing, feeling no happiness in his life anymore. Some time later, Henry hears a bird sing and thinks of freedom like he did when he was child and saw a bird. Henry wants to know how he can free and asks his friend James and Dr. Smith, an abolitionist. Dr. Smith agrees to help him. Henry wants to mail himself in a box to a place where he can be free. In order to do this Henry must get out of work so he injures himself so he does not have to go to work. The next day Henry is in a box on a boat on his way to freedom. The journey is uncomfortable as Henry is upside down most of the way, but he does not move as he does not want someone to hear him. Eventually Henry falls asleep until someone taps on his box and asks if he is alright. Henry awakens in Philadelphia to freedom.

Henry's Freedom Box can be used as a read aloud in a second grade or even third grade classroom. Although the reading level of this book at a second grade level, the historical content could make it useful in a 3-5 classroom despite the reading level. I think that 3-5 students would be able to understand the history a bit deeper than second grade students and it would be more relevant to them as the issue of slavery is studied in the upper grades. However, this book would benefit students in any of those grades. This book would be a good way to help students understand the struggle of slaves on America and how tricky it could be to escape to freedom. Before reading this story the teacher could ask students what they know about slavery and how it affected people. The class could talk about why slavery is a bad thing to occur, and who it impacted. What did slaves do? What were their lives like? The teacher could introduce the character of Henry to students and ask students what they though Henry's life was like. If students do not know about slavery yet though, the teacher should provide students with background knowledge or have students research slavery so that they can better understand the circumstances in the story. While reading the story the teacher can ask students questions pertaining to Henry's emotions; how does he feel when his family is taken from him versus when he comes out of the box in Philadelphia. Students can talk about the different experiences Henry had such as being sold to his master's son and leaving his family as a child and his family being sold and again being torn from his family. Why did these happen to slaves? How did this make Henry feel? When reading about Dr. Smith and him deciding to help Henry, do students think that many people back then would agree to help a slave escape? Why did Henry have to burn his hand to get out of work? Asking students questions about why Henry did certain things or why certain things happened to him help students to understand this somber time in history, and also helps students with comprehension. After reading the story students can make inferences about Henry's life now that he is free. What will he do now? Will he look for him family? Will he help other slaves? Students can write about this and create an extension of the story. Students can also write about whether or not they would have been brave enough to escape to freedom like Henry. Would they be able to make the dangerous decision to leave? Why? Would they not? Why? Students can write an opinion piece on why they think it would be a good or bad idea to try and escape. Lastly, reading this book could lead up to a project where students research abolitionists and freed slaves who made an impact on the lives of those in slavery. Students could talk about how these people relate to those who helped Henry such as Dr. Smith. This book is a good lead in to a unit on slavery, the Civil War, and the Underground Railroad, as it introduces the idea of slavery, and fact that some slaves escaped, so how did they do that? This project could be a research project where they present information on the person they chose, or they could write as this person and write like a diary entry (or multiple diary entries) and talk about their daily lives or a specific instance in which they helped a slave, protested slavery, etc. I think that having students write from the perspective of the person being studied makes the learning more meaningful to students. They cannot just recall facts and write about someone, they have to embody this person and portray their values and write as though they are someone else, so they must really comprehend the story and their person they are studying. Henry's Freedom Box provides students with a plethora of thinking and reflecting opportunities on the topic of slavery and presents history in a first person perspective. This story is based on a true story so just like Dreaming of America: An Ellis Island Story, students can learn about a real experience in history, again providing more meaning to the learning. Students can work on comprehension, predictions, inferences, writing and using evidence in their writing, research, and learn about a rough time in American history, and how some people tried to help those in need. 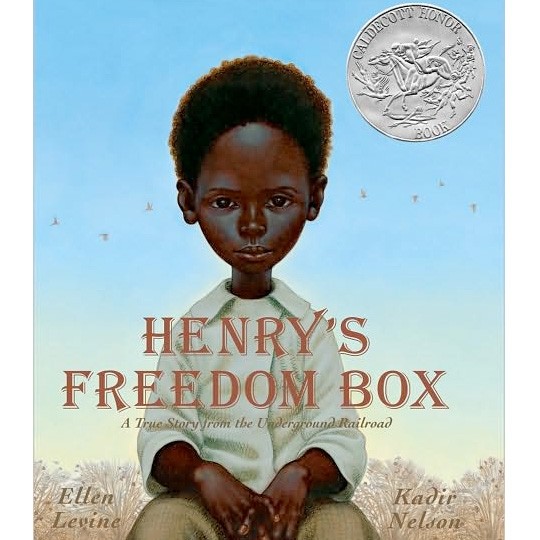