Mohandas Karamchand Gandhi was the preeminent leader of the Indian independence movement in British-ruled India. Employing nonviolent civil disobedience, Gandhi led India to independence and inspired movements for civil rights and freedom across the world. His civil disobedience started in 1893 and lasted till his death. 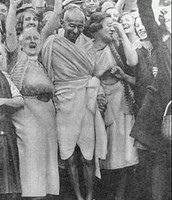 Gandhi during the "Salt March"

Gandhi using Ahimsa(non-violence) as a new tool against colonial rulers who did not know how to react to it, an act which proved successful for India.
Gandhi's Salt March
Gandhi leads civil disobedience

How Gandhi connects to Civil Disobedience

Gandhi connects to Civil Disobedience by what he did. As Thoreau said, “ government is best which governs least”. In Gandhi’s case he wanted India to have no british govern at all. He thought there rule was unfair along with a majority of India’s population. Thoreau exclaimed that “it is not a man's duty, as a matter of course, to devote himself to the eradication of any, even the most enormous, wrong”. Gandhi completely adopted the lifestyle to prove the statement he wanted the British gone. He matured into Swaraj, or complete individual, spiritual, and political independence. Gandhi only wore a thin cloth he made himself for the entirety of this and also fasted to prove a point. In Civil Disobedience it says“under a government which imprisons any unjustly, the true place for a just man is also a prison”(Thoreau). During Gandhi’s civil disobedience against the government he was imprisoned many times. He never gave up, until the end which he was assassinated.