Isabell is using Smore newsletters to spread the word online.

Get email updates from Isabell:

Before the initial discovery of the proton, in 1886 a man names Eugene Goldstein discovered canal rays, which showed that protons were positively charged particles produced from gases. Soon after a few decades later Ernest Rutherford in 1919 was inspired be Goldstein's ideas and began to investigate in 1919. He made his discovery by using alpha particles as bullets to knock out hydrogen nuclei out of six atoms. He named them protons after the Greek word meaning first. This is because a proton is one of the first building block of any atom. With the discovery of the proton he found that the mass of the proton's mass is 1,836 times that of a mass of the electrons. 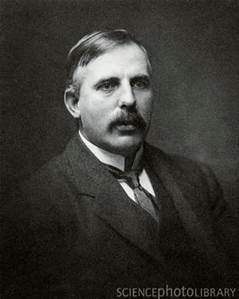 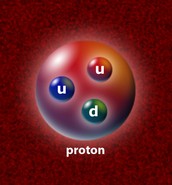 After the initial discovery of the proton properties were spoon discovered as well.

The proton is apart of the Standard Model of Physics

Protons as well composed on two up particles and one down particle. Which gives the proton the most positive charge

The Anti-Proton was thought of by in 1933 by Paul Dirac, but wasn't officially discovered until October 6, 1955 at 4:30p.m by a group of scientist after discovering 38 negatively charged particles with the same exact properties as a proton.

This picture illustrates the methods used to prove the Anti-Proton existence. 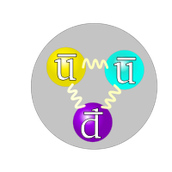 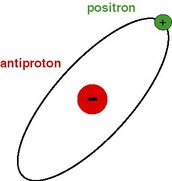 Protons have been used in numerous ways that are unimaginable. It was in the 1940s when the idea of protons being used as a type of therapy first developed. Over thirty years later when I doctor named James M. Slater soon developed what is now called Proton Therapy.

Proton Therapy is said to be one the more efficient ways to treat cancer. It is said to treat specific cancers such as prostate cancer, and spinal cancer. The therapy is carried out through beams such as an X-Ray, and the protons are exposed to the cancerous tissue. Protons are said to only treat the cancer cells, and doesn't expose normal tissue cells to harmful chemicals, or therapies as chemotherapy, and radiation do.

Although proton therapy has been around since the 1970s, the technology still is vastly developing new ways to become more efficient in treating patients. New technologies such has beams, and structures that carry out said therapy are still in the process of developing new ways to treat cancer. These structures are built much like MRIs. With this it is said that the proton therapy be even more accurate in delivering efficient therapy to cancer patient.

Structure that carries out Proton Therapy

This structure is build like and MRI. It is built this way because more accuracy is guaranteed with said structure.

Isabell is using Smore newsletters to spread the word online.