andi is using Smore newsletters to spread the word online.

Get email updates from andi:

The British used taxes to pay for the military costs after the French and Indian war. The taxes British put on the colonists were the Tea Act, Sugar Act,Stamp Act,Townshend Act, and the Intolerable Acts.

A boycott against buying British tea, colonists designed as native Americans threw some 340 chests of tea out of British ships into the Boston Harbor.

The stamp act raised revenues from the colonies. The colonies boycotted British goods. The British then proposed the stamp act. 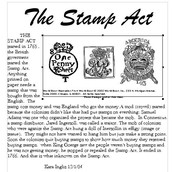 The British made colonist buy a stamp for all paper items that they bought.

Allowed quartering of British troops in all colonies; and gave Canada control of the Ohio region.

Laws passed by parliament placing duties on certain items imported by the colonists.

The colonies and colonists

Colonial taxes: The American Revolution was precipitated, in part, by a series of laws passed between 1763 and 1775 that regulating trade and taxes. This legislation caused tensions between colonists and imperial officials, who made it clear that the British Parliament would not address American complaints that the new laws were onerous.

Sons/daughters of liberty: They were the ones who were not afraid. They knew instinctively that talk and politics alone would not bring an end to British tyranny. They were willing to resort to extralegal means if necessary to end this series of injustices. They were American patriots — northern and southern, young and old, male and female. They were the Sons and Daughters of Liberty.

Patrick Henry: Was an American attorney, planter, and politician who became known as an orator during the movement for independence in Virginia in the 1770s. A founding Father, he served as the first and sixth post-colonial Governor if Virginia , from 1776 to 1779 and from 1784 to 1786

Samuel Adams: Samuel Adams was an American statesman, political philosopher, and one of the Founding Fathers of the United States.

Boston Tea Part: The Boston Tea Party (initially referred to by John Adams as "the Destruction of the Tea in Boston")was a political protest by the Sons of Liberty in Boston, on December 16, 1773. The demonstrators, some disguised as American Indians, destroyed an entire shipment of tea sent by the East India Company, in defiance of the Tea Act of May 10, 1773. They boarded the ships and threw the chests of tea into Boston Harbor, ruining the tea. The British government responded harshly and the episode escalated into the American Revolution.

andi is using Smore newsletters to spread the word online.