Mother was a teacher at a Quaker school 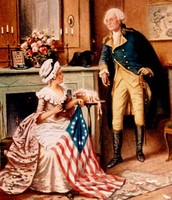 Betsy Ross is sewing a flag while talking to George Washington.

Learned sewing and other crafts common in her day.

Apprentice to a upholster

Upholstery(made flags as part of her business)

Was apart of the Quaker religion

Expelled from her Quaker meetings

Owned her own family business

Has a bridge named after her in Philadelphia

Her husband died guarding for the revolutionary resistance

She was married three times

Gave business to her daughter when she died

Role played in the Revolution

Made the flags and battle flags

Major actions the betsy was involved in

Stayed inside her house while Americans where fighting on the streets

Made dresses for loyalist women (women who were loyal to England)

Repaired the uniforms of British soldiers

Beliefs/Ideas of this person that influenced the revolution

Made the first flag of the united states of America

When the continental army suffered at valley Forge She would sneak food over to them.

Role played after the Revolution

Joined the society of free Quakers.

Loss most of her family to the yellow fever.

Kept making flags for states that asked her to.