Happy Chinese New Year, or Lunar New Year! 2016 is the year of the red Fire Monkey. It begins with the first new moon of the year and ends with the full moon fifteen days later. If you like astrology and want to learn about the Fire Monkey year, this is a fun page.

With Zika being declared a public health emergency, funding for research will come forward. It will also put resources behind a massive effort to prevent pregnant women becoming infected and, through mosquito control, stop the virus spreading. Prof David Heymann, chair of the emergency committee, stressed that the most serious issue was not the Zika virus itself, which causes a mild illness, but the microcephaly cases in babies. “Zika alone would never be a public health emergency of international concern,” he said. “It is not a clinically serious infection.” ♧

An interesting public health byproduct of this epidemic is what it will mean for women's rights. Brazil has some of the world’s strictest abortion laws. The procedure is legal only in cases when the life of the woman is in danger of complications, or she was raped, or she is carrying an anencephalic fetus. While family planning is a constitutional right, many women have trouble getting contraceptives because of poverty or inconvenience. People are discussing how the government must now finally give women basic control over their reproductive lives — accessible and affordable contraception, and safe and legal abortion. The organization Anis — Institute of Bioethics, is preparing to present a case to the Supreme Court with these demands.♧ 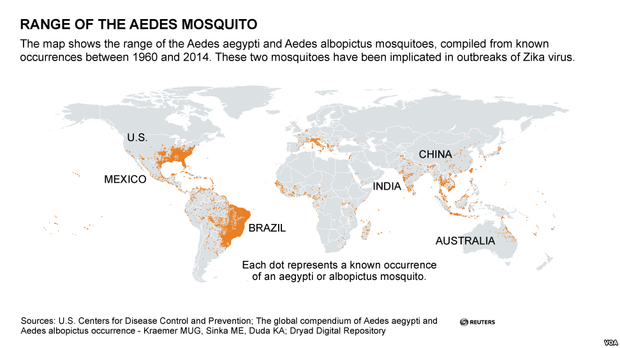 Just over a week ago, a panel of experts met to discuss the best ways to improve healthcare for new and expectant mothers in insecure environments, whether due to conflict or extreme poverty. Around the world, 800 women die every day from preventable pregnancy-related causes and 99% of occur in developing countries. Here is a summary of what they came up with:
Nothing extremely novel, but relevant with the rising concerns of Zika, and an overall great summary and live Q&A. ♧

There was a one day London conference last week, which according to David Cameron raised more than $10bn - the largest amount of money ever raised in one day in response to a humanitarian crisis. "It means millions of people will now receive life-saving food medical care and shelter in Syria and beyond,” said the prime minister. ♧

Women’s rights groups have joined UN and African human rights leaders in urging the president of Sierra Leone to support a bill that would change the law to allow women to terminate a pregnancy in any circumstances up to 12 weeks. The safe abortion bill, which would also allow abortion in cases of incest, rape and foetal impairment up to 24 weeks, was passed unanimously by parliament in December. Technically the President cannot veto it because of the unanimous decision, but he has remained reluctant to sign it under pressure from religious leaders. The new law would reduce the number of abortion-related deaths in a country that has the highest maternal mortality rates in the world. According to the World Health Organisation, Sierra Leone has a maternal mortality ratio of 1,360 deaths for every 100,000 live births. Unsafe abortion also accounts for about 13% of maternal mortality globally. The rapporteurs said Sierra Leone’s high maternal mortality rates are largely due to unsafe abortions and lack of access to lifesaving treatments. ♧

The Guardian collected stories during January on how people have been starting their work to reach our new Sustainable Development Goals. It's a wonderful collection. There is an account of spreading the word in tribal communities, and how awareness of the SDGs themselves makes a big difference. A collaboration between The Mastercard Foundation Scholars Programme and Equity Group Foundation is aiming to give education scholarships to over 20,000 people in Kenya. The program, "Wings to Fly," has a 99% retention rate, and 94% of the first graduating class achieved the qualifications needed to get into public universities. Advocates for International Development, with its network of lawyers and development professionals, is analyzing the role of legal mechanisms in the advancement of the SDGs. Their mission is to inspire and enable lawyers to join the global fight against poverty, and giving legal support to those in the fight. Other stories, including zero waste hospitals and small farmer support NGOs, are all admirable. I would encourage a quick read ♧

Last Monday, students wore black at the University of Burundi to protest the Universities suspending breakfast now that the government can no longer afford it. ♧

After the recent U.N. meeting, Nkrunziza wrote to the 15-member body to say he took note of their concerns. "We have decided — and issued instructions accordingly to the officials of the services concerned — to make ourselves available to the Special Adviser of the Secretary-General," Nkurunziza wrote. He promised they would cooperate closely with the special adviser's team to support an inclusive national dialogue, disarmament, security, human rights and development. The AU will not be sending any peacekeepers, as they are reluctant to set a precedent to intervene without the consent of the host government. ♧

The African Union announced on Friday that they have appointed presidents Mohamed Ould Abdel Aziz of Mauritania, Gabon's Ali Bongo, Macky Sall of Senegal, South Africa's Jacob Zuma, and Ethiopia's Prime Minister Hailemariam Desalegn as members of a panel that will travel to Burundi for talks with Nkurunziza. ♧

Here's a flash preview of the Guardian's 20 photos of the week, which you can see here ♧

Previews of Brazil with the upcoming Olympics,

and a Mars rover taking selfies.

Have a great week, Valentine's Day, and President's Day Weekend.

Next week's letter will be out on Tuesday, February 16, to allow for the holiday on Monday.