In Reading Studio, Penn Class students continued to strengthen their questioning skills by asking questions that were not answered directly in the text. Using The Stranger by Chris Van Allsburg, the students began discussing how they knew the answers to those types of questions. Using The Last Stop on Market Street by Matt de la Pena, students discussed what they know about the characters that the author does not state in the text. Through class discussions during crafting sessions, children discovered that using their schema as well as using evidence in the text or pictures helps to draw an inference. The students practiced drawing inferences during independent reading time, each with their individual goal for inferring.

In Writing Workshop, the Penn Class applied the writing process to make a "How-To" book. They began by brainstorming a list of tasks they could teach someone how to do. From their list, they chose a topic and created a book. Overall class goals included using diagrams, labels and illustrations to help the reader, writing in sequential order, and writing details.

In Discovery, the students continued to learn about electricity through explorations and experiments. Using the scientific process, they experimented with circuits. They made predictions of whether a bulb would light or not depending on how each object (bulb, battery, and wire) was positioned. They then tested each and recorded their results. After discussing the results, they were able to draw a conclusion. Students took a closer look at the inside of a bulb to learn more about how/why it lights. Then, they applied what they had learned to complete a challenge of lighting a 75 W. bulb. The class experimented with switches, building on and strengthening their knowledge of a circuit. They used the scientific process to experiment with the conductivity of materials. From this, they were able to draw conclusions about insulators and conductors.

The students’ Flat Stanleys have begun to return at school. They have taken a close look at what each Flat Stanley has brought back through the use of letters, brochures, pictures, maps, etc. to learn about different places throughout the world. Students practiced reading and identifying various geographical features, as well as terms such as city, state, country, and continent.

In math, 1st grade students used base ten blocks to learn about place value. Using a variety of games, they have focused on how digits and numbers relate. The students were introduced to symbols greater than and less than to compare numbers. They practiced their basic facts to build fact power. Games the students enjoyed this month included Shaker Addition, Base Ten Exchange, The Digit Game, and Addition Top It.

Second grade math students have been focusing on using strategies for adding two-digit amounts together after first making “ball-park” estimations to be sure their totals are reasonable. Other addition skills we have focused on include rearranging three or more addends together by first adding any addends that are complements of tens before adding on the other addends. Students are learning techniques for comparing numbers and finding their difference, analyzing and displaying data, subtracting with regrouping, measuring length, and telling time. Second graders celebrated the 100th day of school through several math stations including hunting for 100 paper pigs, measuring things that have the mass of 100 grams, the length of 100 centimeters, counting 100 steps, and timing 100 seconds while counting backwards. Second graders helped on Fastnacht Day by making a giant bar graph of the four flavors of donuts ordered by everyone in our school.

Penn Class meetings this month were focused on recognizing and expressing one’s feelings. Identifying a variety of feelings, followed by what may cause such feelings, the students generated example I-Messages. An I-Message template looks as follows, “I feel (feeling word) when (cause). Can you please (desired behavior)?" 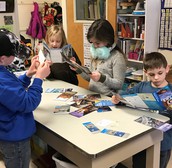 Fox Class students have been reading classics and responding to a list of queries. They have done a good job of finding a query that fit what they read each day. They wrote daily summaries of their reading while they thought about the five W’s. (Who, What, Where, When, Why) Everyone worked diligently to monitor their meaning.

In 3rd grade math, students analyzed data after tossing a coin to see if it landed on heads or tails. We learned how to read a map legend and how to read large numbers into the millions. We continue to work on our multiplication and division facts and sing our multiplication tables each day. The class celebrated the 100th day of school by doing various activities with the second graders. We found 100 hidden paper pigs, measured 100 centimeters, took 100 steps, estimated which jar held 100 things, etc.

In 4th grade math, students are currently in the sixth unit, Division and Measures of Angles. We are learning and practicing how to interpret and solve multiplication and division number stories. A highlight of this unit is learning strategies for solving division problems with 1 and 2-digit divisors. Students are also learning about angles and how to measure them using protractors. We continue to reinforce these concepts through various games and puzzles and students continue to practice problem-solving strategies using Problem Solvers.

Students researched information about the Native American tribe of their choice and created “bullet points.” They turned their bullet points into sentences, then wrote paragraphs on various topics. We began a study of the Inuit and explored their struggles today. We made connections about how the tribes were treated by the Europeans and U.S. Government over time. The students discovered the cruelty of the Trail of Tears and the broken promises by the U.S. Government. We talked about how the pipeline has now been approved to pass through sacred ground on the Standing Rock Reservation.

The Fox Class continued our electricity unit. We explored how many batteries it would take to light a 100 Watt bulb and tested insulators and conductors. We built parallel and series circuits and learned how to record our electrical circuits using the language of electricity.

Fox Class students are meeting with their middle cchool partners each week. They are working on a K’Nex design challenge together. The challenge is to build an eco-friendly amusement park ride. The students watched videos of various rides; now they are at the designing stage.

Students cooked soup for the Quakertown Food Pantry. This is an ongoing service project.

We each chose a Secret Pal for Valentine’s week and made homemade items and delivered them each day. We discovered who our Secret Pal was in a big celebration at the end of the week. 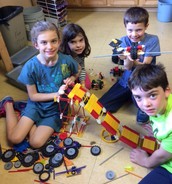 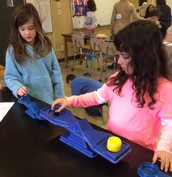 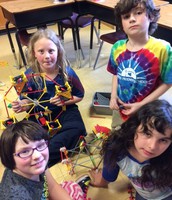 Facebook @quakerschool
1018 West Broad St Quakertown PA 18951 frontoffice@unitedfriendsschool.org 215-538-1733 unitedfriendsschool.org
Embed code is for website/blog and not email. To embed your newsletter in a Mass Notification System, click HERE to see how or reach out to support@smore.com