Jarvis is using Smore newsletters to spread the word online.

Get email updates from Jarvis:

On 8 November, 1942 British-Americans invaded French North Africa during the North African Campaign during the Second World War. The Allies organized three task forces to take the key ports and airports of Morocco and Algeria also targeting Casablanca, Oran and Algiers. Successful completion of these operations was to be followed by an advance eastwards into Tunisia.

The Western Task Force comprised American units. This Western Task Force consisted of the U.S. 2nd Armored Division and the U.S. 3rd and 9th Infantry Divisions ,35,000 troops in a convoy of over 100 ships. They were transported directly from the U.S. in the first of a new series of UG convoys providing logistic support for the North African campaign. 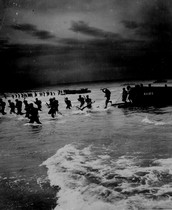 Jarvis is using Smore newsletters to spread the word online.

Follow Jarvis Wilborn
Contact Jarvis Wilborn
Embed code is for website/blog and not email. To embed your newsletter in a Mass Notification System, click HERE to see how or reach out to support@smore.com