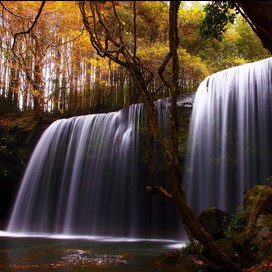 Name is Nicheal I am 16 soon 17 and i love writing and reading and enjoying life tbh. I am very nice person. I am also female.

Get email updates from Nicheal:

The Motion Of The Ocean

The Motion Of The Ocean

Ocean currents can be generated by wind, density difference in water masses causes by temperatures and salinity variations, gravity, and events such as earthquakes. Currents are cohesive streams of seawater that circulate through the ocean. Some are short-lived and small, while others are vast flows that take centuries to complete a circuit of the globe. There are two distinct current systems in the ocean- surface circulation, which stirs a relatively thin upper layer of the sea, and deep circulation, which sweeps along the deep-sea floor.

What Are Gyres? Where Do They Occur?

Surface currents located on the western side of the subtropical gyres, so called western boundary currents, are faster than their eastern counterparts. In fact, thy are among the fastest surface currents in the ocean. One reason for the westward intensification of boundary currents has to do with the Coriolis effect with latitude. The Coriolis effect is stronger in the latitudes of the westerlies than in the latitudes of the trade winds. Transport of surface waters toward the western boundary of the ocean basins causes the ocean surface slope to be steeper on the western side (verses eastern side) of a gyre (in either hemisphere). A steeper ocean-surface slope translates into a faster geostrophic flow on that side of the gyre.

Upwelling is an oceanographic phenomenon that involves wind-driven motion of dense, cooler, and usually nutrient-rich water towards the ocean surface, replacing the warmer, usually nutrient-depleted surface water. The three main drivers that togther to casue upwelling are: wind, Coriolis effects, and Ekman transport. They operate differently types of upwelling, but the general effects are the same. The major upwellings in the ocean are associated with the divergence of currents that bring deeper, colder, nutrient rick waters to the surface. There are at least five types of upwelling: coastal upwelling, large-scale wind-driven upwelling in the ocean interior, upwelling associated with eddies, topographically-associated upwelling, and broad-diffusive upwelling in the ocean interior. Upwelling at the equator is associated with the Intertropical Covergence Zone (ITCZ) which actually moves, and consequently, is often located north or south of the equator. Upwelling intensity depends on wind strength and seasonal variability, as well as the vertical structure of the water, variations in the bottom bathymetry, and instabilities in the currents.

Downwelling is the process of accumulation and sinking of higher density material beneath lower density material, such as cold or saline water beneath warmer or fresher water or cold air beneath warm air. Downwelling occurs at anti-cyclonic places within the ocean where warm rings are spinning clockwise creating surface convergence. When these surface waters converge, they push the surface downwards. Another way that downwelling can occur is by the wind driving the sea towards the coastline. Regions that have downwelling have low productivity because the nutrients in the water column are utilized but are not continuously resupplied by the cold, nutrient-rich water from the below surface. Downwelling also allows for deep ocean ventilation to occur because these waters are able to bring dissolved oxygen down from the surface to help facilitate aerobic respiration in organisms throughout the water column. Downwelling occurs in areas such as in the subpolar gyre of the North Atlantic where several surface currents meet. Also find downwelling along the outermost boundary of the Southern Ocean where cold Antarctic water sinks below warmer South Pacific and South Atlantic waters. There is also downwelling on a few coastlines where wind blows in such a direction that causes Ekman tansport to move water towards the coast which then causes the water to pile up and be pushed down.

El Nino Southern Oscillation (ENSO) is an irregularly periodically climate change cuased by variations in sea surface temperatures over the tropical eastern Pacific Ocean, affecting much of the tropics and subtropics. The warming phase El Nino and the cooling phase as La Nina. The two variations are coupled: El Nino is accompanied with high, and La Nina with low air surface pressure in the tropical western Pacific. The two periods last several years each typically three or four and their effects vary in intensity.

Climate is the long-term pattern of weather in a particular area. It is measured by assessing the patterns of variations in temperature, humidity, atmospheric pressure, wind, precipitation, atmospheric particle count and other meteorological variables in a given region over long periods of time. Climate is different from weather, in that weather only describes the short-term conditions of these variables in a given region. A region's climate is generated by the climate system, which has five components: atmosphere, hydrosphere, cryosphere, lithosphere. and biosphere. The climate of a location is affected by its latitude, terrain, and altitude, as well as nearby water bodies and their currents. Climates can be classified according to the average and the typical ranges of different variables, most commonly temperature and precipitation.

This deep water current is known as the global conveyor belt and is driven by density differences in the water. Water movements driven by differences in density are also known as thermohaline circulation becuase water density depends on its temperature (thermo) and salinity (haline). The global conveyor belt is crucial to the base of the world's food chain. As it transports water around the globe, it enriches carbon dioxide-poor, nutrient-depleted surface waters by carrying them through the ocean's deeper layers where those elements are abundant. The belt as helps regulates temperature.

An ocean current is any more or less permanent or continuous, directed movement of ocean water that flows in one of the Earth's oceans. The currents are generated from the forces acting upon the water like earth's rotation, the wind, the temperature and salinity differences and the gravitation of the moon. The depth contours, the shore-line and other currents influence the current's direction and strength. Ocean currents can flow for thousands of kilometers. They are very important in determining the climates of the continents, especially those regions bordering on the ocean. Deep ocean currents are driven by density and temperatures gradients. Thermohaline circulation, also known as the ocean's conveyor belt refer's to the deep ocean density-driven ocean basin currents. These currents, which flow under the surface of the ocean and are thus hidden from immediate detection, are called submarine rivers. 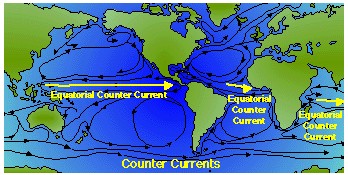 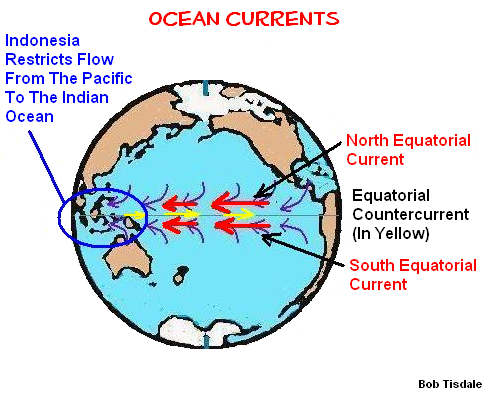 Name is Nicheal I am 16 soon 17 and i love writing and reading and enjoying life tbh. I am very nice person. I am also female.