Reanna is using Smore newsletters to spread the word online.

Get email updates from Reanna: 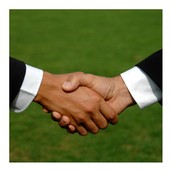 French: rapprocher- to bring together

* mainly words related to disagreement, although not strictly related to foreign relations.

*words relate to restoration of harmony, and can be used in any such situation

-first used in 1809 from French rapprochement (dictionary.com).
-began to appear frequently in the English language after used to describe President Kennedy and Castro coming to an agreement with the Cuban Missile Crisis in 1962
-frequently used to describe Nixon mending relations in China in 1972
- became well known due to these political figures and national events

CHOOSE THE LETTER OF THE SENTENCE IN WHICH THE WORD IN BOLD-FACED TYPE IS USED INCORRECTLY.

The correct answer is C.
Rapprochement occurs between two countries or two distinct people groups that represent nations, not used when describing two ordinary people coming back together.

Reanna is using Smore newsletters to spread the word online.