Jatin is using Smore newsletters to spread the word online.

Get email updates from Jatin:

Today, after you read this article, you will learn many things about “Brett Favre, A Stupendous Football Player”.

First Favre was selected by the Atlanta Falcons in the 1991 NFL draft. Then he got traded to the Green Bay Packers the next year. Favre lead the franchise to victory in the Super Bowl XXXI. He was also named the league’s MVP 3 years in a row. After shorter stints with the New York Jets and the Minnesota Vikings, Favre finally retired from football. His contract with the Jets was over by then.

When Favre first heard he was traded, he was kind of shocked. Ron Wolf traded a No. 1 pick to Atlanta for Favre, a 1991 second-round pick of the Falcons. Brett Favre was born on October 10, 1969, Gulf port, MS. His spouse is Deanna Favre. Brett and Deanna were married in 1996. He went to the University of Southern Mississippi. He has 2 children named Brittany Favre and Breleigh Favre.

The age Favre was for his First Team

In the 1991 NFL draft, the Atlanta Falcons chose the young QB, who was 22 years old, with the 33rd overall selection. Favre just took a few snaps for the Falcons his rookie year. Throughout the year, the franchise was at odds over what the future held for Favre and so when the Green Bay Packers offered the club a first round pick for the backup quarterback, the team took the deal. Favre went on to have an outstanding run with the Green Bay Packers.

The Start and End of a Remarkable Career

In 2008, the Packers traded Favre, who had confused feelings on whether to retire, to the New York Jets. While his 2008 season with the Jets started out well, the team lost four of their last five games, including their final game against the Miami Dolphins. They also missed the playoffs. In April 2009, Favre was released from his contract with the Jets, and began a career with the Minnesota Vikings. Despite continuing to pronounce that the 2010 season would be his last, Favre returned to Minnesota in 2011. He ended his career with many NFL records. Brett Favre’s career started in 1991 and ended in 2010.

Take my advice and never give up on your dream, Brett Favre didn’t and he became a fantastic football player!

Brett Favre is calling a foul. 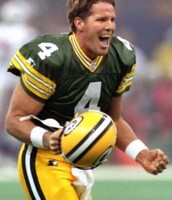 Brett Favre celebrates after throwing a touchdown pass in the Superbowl.

Brett Favre is signing a football after a big game. 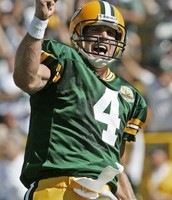 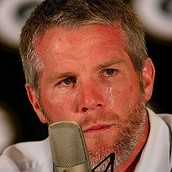 Brett Favre when announcing is retirement.

Jatin is using Smore newsletters to spread the word online.