Get email updates from Bobby: 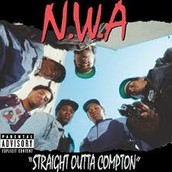 Gangsta rap is a subgenre of hip hop with a lyrical focus on the activities of illegal street gangs and the "thug" or "gangsta" lifestyle. It was pioneered in the late 1980s by a group out of Comptom, CA called NWA. NWA was made up of Dr. Dre, Eazy E, Ice Cube, Arabian Prince, and MC Ren. The unfamiliar music portrayed the harsh yet real lives of young black men on the streets. The group sent messages to the public through music called gangsta rap.

Are there any racial differences with this item?

Absolutely. The majority of the songs are about racial discrimination. The lyrics describe the struggle of the life of a black man at this time in history. The group received many death threats and were harassed by the police all of the time before and after they became famous.

Has this shaped our class, regional, or national identity?

This movement of gangsta rap has completely shaped our society today. The music you hear on a daily basis would not exist if this group hadn't broke the barrier to rap music. Rap music is a huge hit today because of the freedom these artists have to express themselves. This is all thanks to NWA.

Does it say anything about gender or gender norms?

The gangsta rap movement was mainly an issue of race, not gender. However, many questions were raised about the group because of their vulgar lyrics and many considered them degrading to women.

Is this accepted by all classes of society?

Gangsta rap was most certainly not accepted by all classes of society. NWA received threats mainly from the middle and upper class white folks, and law enforcement. The crowd that is reseponsible for buying all of the NWA albums are the people that live the life of the music. Black boys and girls from the inner cities and gangs everywhere. The teenagers and young adults especially, black and white, loved this music as it blew up all throughout the country.

Was there any backlash to your idea or item? If so, explain specifically what happened and if not, explain why you believe it was universally accepted.

NWA was certainly not universally accepted. However, the persistence of the group the hard times ended up changing the world we live in. Not only racial discrimination, but freedom of speech and expression had a new meaning.

Does this item impact politics or does politics impact this item?

Politics did impact the group. They received many threats, but the big one came from the FBI itself! The FBI threatened them by letter after they released one of their hit songs, "F**k the Police" about police brutality and the cruel reality of their past.