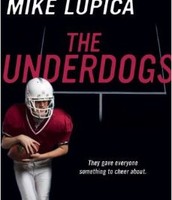 This book a football team in Forbes, they have a talented guy on their their middle school team name Will Tyler. They are playing in championship against Castle Rock. They were about to win but Will Tyler slipped near the touchdown and fumbled. He felted embarrassed, it hasn't ever happen to him before. After the season ended, they couldn't find a full team to play with or even have enough money to buy uniforms to wear. Will Tyler decided to contacted New Balance through a letter explaining why they cant play. He thought New Balance would never contact him back until later that week he got a letter telling that they would help fund the Forbes middle school football team. But there was a down side of it they had to find one player and had to find a coach. So, he decided to go over to a kid's house named Toby Keenan. Toby Keenan was a kid who hasn't played for two years but he was a really good football player two years ago. Will Tyler went over there but Toby didn't know if he could play because of what happened. Will Tyler had to also have a coach, so he decided to ask his dad if he could coach. His dad use to be a all star football in high school until two guys hit his knee. Will Tyler keep telling his dad to coach to coach but he keep saying no so until they ended the conversation his dad decide to say yes to his dad. They have finally have a chance to win the championship.