avery is using Smore newsletters to spread the word online.

Get email updates from avery:

By: Avery, Aaron, Cameron and Varsha

Questions About the Civil War

Why are the alawite Shia Muslims fighting against the Sunni Muslims?

What happened the the children that got arrested for doing political graffiti?

What specifically provoked the Syrians to start doing anti-government protests?

Are the Syrians doing anything else besides protests to fight against their government?

Is the Syrian Government doing anything else to stop the protesters, if not then why?

Who do the neighboring countries support and what are the doing to help?

How come the sunni muslims were blocked from political power? 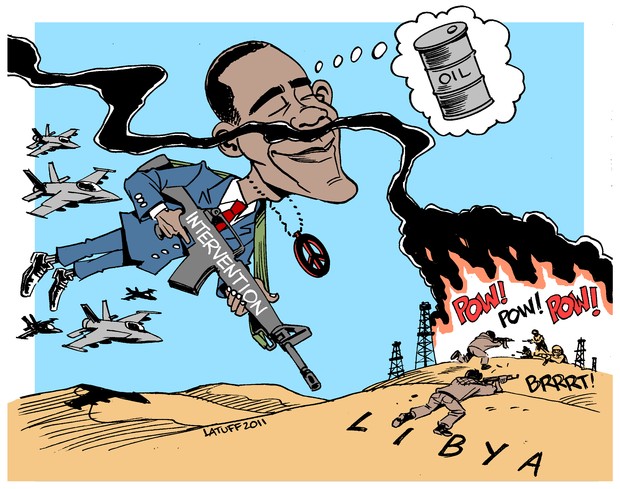 March 2011, the military intervention in Libya. Obama went into Libya and took down their leader Moammar Kadafi, he warned people anybody who follows this leader will be slaughtered. They called it a covert intervention because president Obama's administration says it is better to fight small wars without leaving a huge footprint.

In this cartoon, the artist is using labeling, and exaggeration. In the background of this picture you can see the US army shooting at the Libyan army, showing the libyan war. By having president Obama flying over all the people with the fighter jets, he was trying to convey that the president came into libya to create peace (hence the peace sign around his neck) by having an “intervention” instead of war. What pops out most to me is the very oversized sized oil towers right behind them. That correlates the the thought bubble with the picture of oil. It explains how Obama is thinking of making Libya another oil source.

At first glance, I knew that the cartoon was going to convey some message talking about Obama and oil. By looking into more detail at the picture it’s self I picked up on more quaint things such as the peace sign necklace. I think that the cartoon is trying to explain how Obama is going to go into Libya to take down their leader and create peace without making the war worse.

This article by Joe Sterling, part of CNN, discusses the protests that occurred when young Syrian boys were captured by the authorities for vandalizing property using spray paint. The tile of the article is “Daraa: The spark that lit the Syrian flame”. In the article, the flame represents political resistance, a merciless security crackdown and cries for democracy. The title does make a good connection with the rest of the article because the main topic of the article is how a couple children being arrested in Daraa resulted in the government shooting into crowds of protestors. This helped much more of the world to become aware of the issue at hand. Like a flame, the situation in Daraa began to grow and become more intense, spreading throughout Syria. Right below the title, there is a large photo of protestors in Damascus chanting, “Daraa is Syria”. This does make a good connection with the article because that is what the article is focusing on. However, this is the only picture in the whole article. Could adding addition pictures to the article provide the readers with a deeper understanding of what is being discussed in the article?

The picture located at the top of the page and it is eye catching but the reader may not know what is going on in the picture. The caption only provides what they are saying and where they are but the reader does not know what for. Using the picture later in the article, after explaining what the protests are for would be a much better use of the photo. The article does begin with talking about what happened in Daraa a little bit but then it goes into talking about what happened beforehand. By introducing too many ideas at once, the author could confuse the reader. Having some background information is good but it should be introduced in the beginning, not after there is a small piece of information given about the main topic of the article. When reading about the protests, the article takes the points of views from the people inside the protests, such as Mohja Kahf, a professor in Syria. Could taking the points of views of the police change the tone of the article all together? In today’s world, protests have become something many people rely on to be heard. When Dr. Martin Luther King Jr. and more than 200,000 other people went to the Lincoln Memorial to protest for their own rights, it was heard from all around the world. The protests in Syria were able to do the same thing. 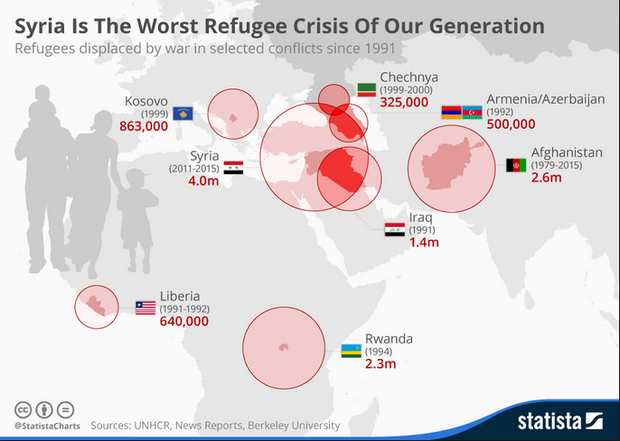 This map produced by Statista uses information from UNHCR, new reports, and Berkeley University to introduce a new perspective on the Syrian refugee crisis. The entire world is aware of this crisis and has heard stories of the hardships refugees are going through everyday, trying to seek asylum. However, many don’t understand just how large the magnitude of this crisis is. This map/infographic compares the Syrian refugee crisis that began in March of 2011, to various other refugee crises that have occurred since 1991.

Though there are no geographical features, boundaries of countries, or oceans visible on the map, it is evident that the author of the map wanted to focus on countries in the Middle East and Africa. The reason for only focusing on these regions and leaving out the rest of the world could be to show that the majority of the crises since 1991 took place in the Middle East/Africa region, or that the most severe crises took place there. In terms of spacing and organization, the map is legible and organized fairly well. The only part of the map that could possibly be confusing for the viewer is the labeling of countries. There are a few red circles – which surround a country that experienced a crisis - that are in a cluster, and the labels that should go along with each circle are placed far away from the circles. An effective way to fix this issue can be by connecting all the red circles to their corresponding texts using lines. This way, people who don’t know where some of the countries mentioned on the map are, would not have to look at a different map or guess to clear their confusion. In addition, what other changes could the author of the map made, in order to avoid this confusion?

The red circles surround countries that have experienced, or are experiencing a refugee crisis. The size of the circles corresponds to the severity of that crisis – in this case, the number of refugees displaced. For example, Chechnya’s refugee crisis that only lasted for one year and resulted in 350,000 refugees to be displaced is encircled with the smallest circle on the map. However it is interesting to see that in the same year, the refugee crisis of Kosovo – which only lasted a few months – resulted in 863,000 displaced refugees. Looking at the information provided by the map, would adding some key details about each conflict have been helpful for the reader to gain some background knowledge about each conflict? Or would it have taken away from the map’s primary focus?

Though the author could have considered adding a few additional elements to the map, overall the organization and layout of the map is neat and legible. The author is able to convey the map’s primary focus well by adding sufficient information, and does not provide additional information that could potentially deviate from the map’s purpose.

avery is using Smore newsletters to spread the word online.