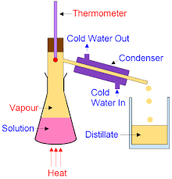 What is the Process of Distillation ? Include the Steps.

Process : To distill something of your choice.

Steps : The process consists of having a large bowl and filling it up with water, no more than two centimetres high. Then add a mixture of grass and soil evenly throughout the bowl. Put a smaller bowl in the centre of the larger bowl and if it floats, drain some of the water out so that it sits flush on the bottom of the bowl. Place cling wrap over the whole large bowl and leave it in the sun for three to four hours.

What is the Distillate ?

The water that is fit for people to drink after the distillation process. 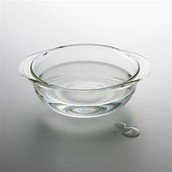 These are some products that result from the process of distillation.

- water that is fit for us to drink

Distillation performed in the science lab is hurried because you have the equipment to do so, you also have in your possession, the correct equipment, whereas solar distillation is more natural and the only scientist in that situation is the sun and not to mention the time that solar distillation takes to actually distill something from something else.