Once upon a time, there was a squirrel that lived in the tallest Oak tree in the woods. Everyday, the squirrel would sit on the highest branch and watch the neighborhood dog run around his yard and chase his tail. Day after day, the squirrel thought to himself, "That dog is dumb." The squirrel was known for his quickness and trickery. He had outsmarted every single animal lurking in the lush, green woods. All, except the dog.

One early morning, the squirrel scurried down from its tree and onto the yard. The soft blades of grass were wet with dew, and the sun was just reaching over the hilltops. Just like every early morning, the dog was let out into the yard. The dog skipped, leaped, and played with himself in the grass. The squirrel leaned his back onto the tree and laughed thinking, "Why am I wasting my time with such a fool?" The squirrel continued on smirking at the dog, not paying attention the world around him. Then, all of a sudden, the dog whipped around the trunk of the tree and snatched up the squirrel. The squirrel squeaked and pleaded for the dog to let him go. Finally, the dog set the squirrel down in the corner of the yard and whispered wisely to the squirrel, "Never underestimate your enemy, and never overestimate your pride." Then the dog strolled away, leaving the squirrel alone in the corner of the yard.

The life lesson and moral of the fable

The jar represents the moral because when you guess how many jelly beans are in the jar, you can either over estimate, underestimate, or get it exactly right. 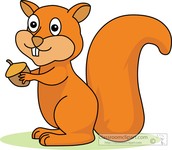