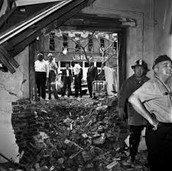 When and Where did this happen?

The 16th Street church bombing took place in Birmingham Alabama, September 15th 1963. The bombing was done by the KKK (Klu Kluks Klan) at 10:22 in the Baptist Church. Nearly 200 members of the church were attending that morning, all of which were African-American. Many bomb threats were previously made by the KKK during civil rights marches, led by Martin Luther King Jr, who previously was put in the Birmingham prison by leading a civil rights March. Four young women died from the blast, in a basement restroom, a 5th girl was in the restroom, but only lost one of her eyes, 20 people were also badly injured.

The men who caused this tragedy were finally put in jail, in 2001-2002. The two were named Bobby Blanton, and Bobby Frank Cherry were the ones who did this terrible crime.