Land in Europe shows great variation within small areas. The southern regions are mountainous, while moving north the terrain descends from the high Alps, Pyrenees and Carpathians, through hilly uplands, into low northern plains which are vast in the east. An arc of uplands also exists along the northwestern seaboard, beginning in the western British Isles and continuing along the mountainous, fjord-cut spine of Norway.

Stretching from the Pyrenees Mountains (French-Spanish border) to the Ural Mountains (Russia) the Northern European Plains go 200 miles in width and make 2,000 miles in length. They cover all of western and northern France, Belgium, southern Scandinavia, northern Germany, and all of Poland. Also, Denmark, Czech Republic, and the more eastern part of England. The Northern European Plains is mostly flat with a marine west-coast climate.

Distinct physical features had a lasting impact on how European cultures communicated with each other. With its central European location but geographic remoteness, the Alps region developed a crossroads for Europe’s dominant languages, and a refuge for its languages. This diversity is present in the Alpine regions of many European countries today. The European Plain has long been a region of agricultural importance and, apart form the small area occupied by its cities and towns today the landscape, especially in the east, remains agriculture.

All throughout the Northern European Plains, when it comes to resources, they are rich in coal and oil. With the marine west-coast climate throughout the Plains, they have good farmland. 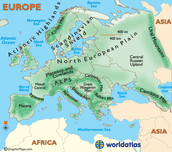 East of the Northern European Plains.

South of the Northern European Plains.

The connection between the physical and human geography is that they both show the location, size, and surrounding physical features and landforms. They both also show what the landforms have to do with the population of people.