Sky is using Smore newsletters to spread the word online.

Get email updates from Sky:

In contrast to what some believe, the White Tiger is neither a subspecies in its own right, nor an albino form of a normal’ tiger. Rather, it is simply a rare form of Bengal Tiger that possesses a specific gene, giving it a lighter appearance. Their mystery and beauty. They also have blue eyes, rose-pink noses and light brown stripes make these tigers stand out from their rust-colored peers.The scientific name of the White Tiger is Panthers Tigris, since it is merely a different colored version of the Bengal Subspecies. 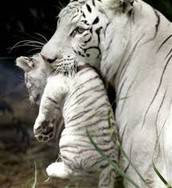 How is it born? How does the mother care for it’s young?

In order for a White Tiger to be produced, both of it's parents must carry the gene. Male and female White Tigers are attracted to one another by their roars and scent marks, and once mated, the male and female go their separate ways. After a gestation period that lasts for around 3 and a half months, the female White Tiger gives birth to up to 5 cubs, which are blind and weigh roughly 1 kg each and can have either white or orange fur. The White Tiger cubs suckle on the milk from their mother and begin to eat meat that she has caught for them when they are around 2 months old, and are weaned four months later. The White Tiger cubs begin to accompany their mother hunting and eventually leave her and begin their solitary life in the jungle when they are about 18 months of age. White Tigers have an average lifespan of 12 years, which can be longer in captivity.

How does it get it’s food? What does it eat?

White tigers are predators that hunt wild cattle, wild pigs and several species of deer for food. They mainly feed on fresh kills, and can eat as much as 18 kg of meat at once.White tigers will eat wild pig, cattle, and several species of deer. They will gorge on fresh kills and can eat up to forty pounds of meat at one time. Then they won't eat for a few more days.

Where does it live, and what are some of its habits?

Who are it’s enemies, and how does it defend itself?

In the natural order, tigers have no actual enemies or predators. They are predatory and territorial animals. Because of their size and strength, they are at the top of their food chain. From time to time, a tiger may tangle with an elephant, in which case the elephant can simply stomp on the tiger and it's over. But generally, the two do not seek each other out. A tiger protects itself by its teeth and sharp claws. In addition, its stripes act as camouflage to help it to blend into its surroundings. It also has the ability to swim or climb into a tree. It is also large, strong and agile.

Sky is using Smore newsletters to spread the word online.