End of term reports will be posted to you today. The students have been advised to take notice of the feedback given in the reports by subject staff to improve their grades and exam performance. If this is acted upon immediately, there is still time to see an improvement in their mock exams in February.

Thank you to everyone that has completed our Bulletin Questionnaire. If you haven’t done so, the form will be open for your feedback until 12 noon on Monday 16 January.

Swimarathon at the Magnet Leisure Centre

On Saturday 7th January, a small band of generous spirited, fun loving 6th formers represented Claires Court in the Lions Club annual swimarathon at The Magnet. Year 12 were represented by Hattie Thomas, Tom May and Todd Muil and Year 13 were represented by Flora Gault, Sophie Corrigal, Laura Batten, Alexei Murphy, Chris Rayer and Toby Yates. Daisy Fowler, Mrs. Burdett and Ms Renardson cheered them on as they completed a total of 117 laps (334 lengths). The exact amount of money raised by the teams is still to be confirmed but as the photos show, they were supporting the Lions Club charities and Foodshare (Maidenhead). The various food items on the posters are all examples of items currently required by Foodshare for distribution to local people in need.

Our swimmers really did Claires Court proud as their camaraderie, team spirit, generosity and determination were an absolute delight to behold. They were real stars.

Our three teams (Strike Vinyl, String Line and Lagoon) went to the Young Enterprise meeting on Wednesday 11th January 2017 at Adobe, Maidenhead. All teams were congratulated on their hard work and efforts to date. The three teams submitted their business plans in December which were of an excellent standard. Competition is strong as there are 13 teams in the SWIM area therefore each team recognises they have a lot of work to do before the Slough Trade Fair on Saturday 4th February. Here are the three teams with Mr Kevin Hunt - Chair for the Area Board 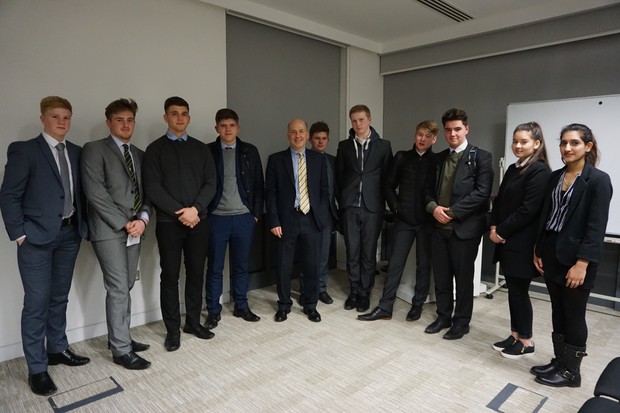 Entry is now open for the 2017 ISA Sixth Form Essay Competition. The essays will be judged in three subject areas: English and Literary Analysis, Science, IT and Technology and Arts and Humanities subjects. Submissions may be pieces of work that have already been completed in the course of sixth form studies, however they must be within the 1500 word strict maximum limit and they should not have been heavily edited/re-drafted following teacher comments/feedback.

Come to the Library to find out more and or see the full details on the ISA website.