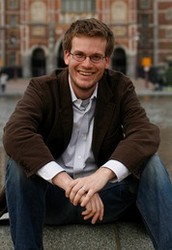 Other books by John Green:

Nothing was the same after that one drunk night. 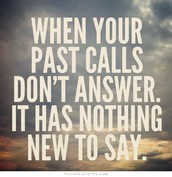 The whole story line revolved around the past. It affected everything the protagonist did and shaped how the story ended. The past is the evil that can never be defeated. 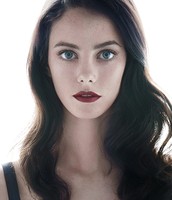 She's the wild child. The one who drinks, smokes, pranks, and makes the irresponsible decisions. She captures the hearts of many people, especially Pudge. She's the reason why the book ended how it did, she is the decision maker. 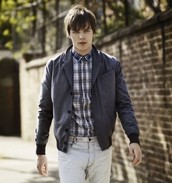 Pudge is this scrawny teen who is gets corrupted by Alaska and the Colonel, Pudge's roommate. When coming to Culver Creek he was innocent, until Alaska and Colonel get him to drink, smoke, and break rules.

"If people were rain, I was a drizzle and she was a hurricane." - Pudge

The boarding school Pudge is going to. 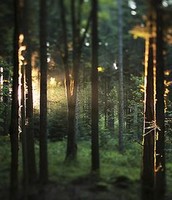 Where many late nights behind the school took place. 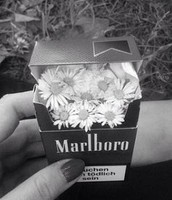 Alaska would sell cigarettes to students and they would smoke in the smoking pit in the forest.

"I go to seek a great perhaps" - Alaska 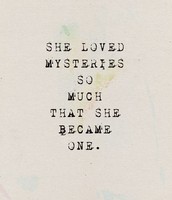 Alaska Young was a mystery. Her actions leading up to her death was a complete mystery. 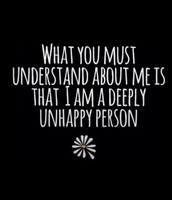 When Alaska was very young her mother died from an aneurysm. To this day, she blames herself for the death of her mother. 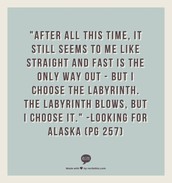 The question throughout the book is "how do you get out of the labyrinth." Well, Pudge had his way of getting out and Alaska had hers.

The archetype that best fits Looking For Alaska would be Rags to Riches. In the beginning, Pudge began with nothing. He had no friends in the school he was attending and lied to his parents that he was popular.(Green, 5) On the first day of Culver Creek, Pudge had made a two new friends, Colonel and Alaska, and had many new experiences. He had everything he wanted, until one drunk night he lost it all. Colonel, Alaska and Pudge were in Alaska’s dorm room where they were drinking wine. In the their drunken state, they all decided to play truth or dare. Alaska asked first, turning to Pudging and saying “truth or dare.” (130) Pudge wanted a dare, so in result Alaska dared him to hook up with her. (130) They had a heated make out session for a couple of minutes until Alaska stopped them because she had gotten a phone call from her boyfriend. She answered the phone and went outside to take the call. (131) After the call, she frantically told Pudge and Colonel that she needed to get out of Culver Creek, and she did. The next day they had an assembly, the principal told them that Alaska was in a car crash and didn’t make it. (139)

In result to Alaska’s death, Pudge blamed himself. He wanted to know why she left that night, so the Colonel and Pudge tried to solve the mystery. As a result, they concluded that Alaska forgot about the anniversary of her mother’s death. She left because she was racing to get to the cemetery but she got in a car accident. (211) Knowing this, Pudge had gotten some closure and soon became himself. Just like how a Rags and Riches archetype should be, lose it all but gain it back.