"...beauty is not really about teeth or body fat ratio or hair or skin color. It's about something intangible. A soft voice, the way someone turns their head, the way a person smiles, or the light in their eyes." - Sue Thomason 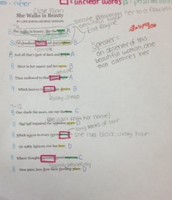 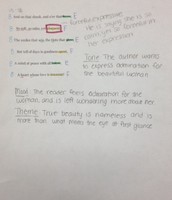 Theme- True beauty is undefinable, and is more than what is seen at first glance.

"And all that's best of dark and bright/Meet in her aspect and her eyes."

In this song, the artist is expressing how he admires this girl because of her "beautiful soul." He doesn't say that he admires her for her looks, or body, or anything else, he loves her soul. He doesn't want "another pretty face" or "just anyone to hold." This shows that he sees behind her good looks, and knows that this girl is something special. This is similar to the way the speaker thinks of the woman in the poem. In the third and fourth lines of poetry, the speaker is basically saying that everything that is good and beautiful meets in the woman's aspect, meaning her personality and the way she views life, and in her eyes. This suggests that not only is she beautiful on the outside, but is also beautiful within, in her soul. After all, they always say, the eyes are the window to the soul!

"Where thoughts serenely sweet express/How pure, how dear their dwelling-place." 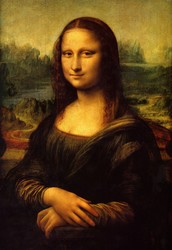 This beautiful and timeless painting was created with oil paints on a poplar wood panel. It is known for its astounding realism and intriguing mystery. In the painting, the model's smile is one of the most talked about expressions of all time.

In the lines eleven and twelve of "She walks in beauty," the speaker is talking about the beautiful woman's expression showing her serene and sweet thoughts being expressed on her face. This relates to the Mona Lisa because her sweet, mysterious, yet subtle smile can come across as "pure" and "dear," just like the woman in the poem.

"The smiles that win, the tints that glow/But tell of days in goodness spent."

Mother Teresa is known as a figure of charity and good works for the suffering people in Calcutta, India. She won the Nobel Peace Prize for her humanitarian work in 1979, and was known as a "living saint."

In lines fifteen and sixteen of the poem, the speaker is describing the way that the woman's smile and glowing face show the good works that she has done. Not only is the woman beautiful on the outside, but she is also beautiful in the good deeds that she performs. Mother Teresa, even in her old age, appears to be kind and good, similarly to the description of the woman in the poem.