Get email updates from Mckayla(I'M AWESOME): 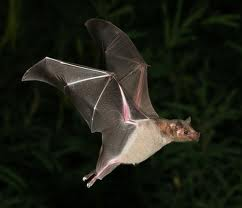 The Mexican long-nosed bat is a colonial species, typically roosting in large groups that may number as many as 10,000 or more, and which may occupy the same roosts from year to year. The bats emerge well after sunset, and feed on the nectar and pollen of night-opening flowers of agaves, cacti and other plants. Fruit and insects are also occasionally taken, although the insects may be eaten accidentally while feeding on the flowers.This species is a vital pollinator of several agave and cactus species, and shows a number of adaptations for its specialised diet. The long muzzle houses an impressively long tongue, which can be extended more than seven centimetres to reach deep into flowers, and which has hair-like ‘papillae’ on its tip, ideal for lapping up nectar.

Aptly named for its elongated muzzle,the Mexican long-nosed bat is also recognised by its prominent noseleaf, short ears, long, relatively narrow wings, and lack of a visible tail. A medium-sized bat species, it has quite long, soft fur, which is sooty or drab brown in colour, with the individual hairs having white bases and silvery tips. The underparts and shoulders are paler. The tail membrane, which stretches between the hind legs, is narrow and moderately hairy, with a conspicuous fringe of short hairs, while the base of the forearms is haired, and the legs and feet are also moderately hairy. Individuals in the north of the range may be slightly larger than in the south.

The Mexican long-nosed bat is reported to occur from southeast Arizona, southern New Mexico and western Texas in the USA, south to southern Mexico and Guatemala. However, its presence in Guatemala may need confirmation.

This species inhabits desert scrub with Agave, mesquite, creosote bush and cacti, as well as pine-oak and deciduous forest, generally at elevations up to around 3,500 metres, although it has also been recorded at over 5,000 metres. Roosts are located in caves, mines and tunnels, or sometimes in hollow trees or abandoned buildings

The Mexican long-nosed bat has undergone a major population decline in recent years, and several caves in Mexico that once contained large numbers of bats now contain only small numbers or none at all. The main threat to the species is believed to come from a decrease in its food supply, due to habitat clearance and the exploitation of agaves for the production of alcoholic drinks such as tequila. This harvest poses a particular threat as the agaves are harvested just before blooming, preventing the plant from flowering, and, since agaves grow for 10 to 20 years, flower only once and then die, it can also prevent the agaves from reproducing. The Mexican long-nosed bat’s dependence on a continuous supply of food plants along its migratory routes also means that loss of the plants in any single area could have negative consequences for this species