Did you miss library orientation?

If you missed last week's library orientation for 2nd-5th grades (or just want to go over things again), make sure you check out the FSS Library blog to view Ms. Knight's presentation. If you have any questions, please don't hesitate to let us know!

4th or 5th graders interested in the News Team are reminded that applications MUST be turned in by Tuesday, September 2nd! Auditions will be held on September 3rd and 4th. The announcement of the 14-15 News Team will be on Friday, September 5th.

An electronic copy of the application packet is available on the library blog. 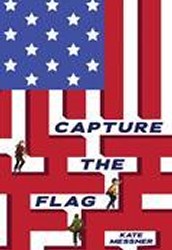 Book of the Week: Capture the Flag

A flag has been stolen from the Smithsonian, but this is not just any flag. It’s the flag that inspired Francis Scott Key to write “The Star-Spangled Banner.” Who would dare to take such a priceless piece of American history? What could the possible motive be? It’s not like this would be something that could be easily sold, so why would someone take something that means so much to so many? That’s what a few curious kids are going to find out…

Anna, Henry, and José are snowed in at the airport in Washington, DC, and, when they hear about the theft of the newly restored flag, they become convinced that whoever took the flag must be snowed in as well. What starts as a way to pass the time soon becomes a quest to uncover a mystery with the potential to shake the nation. Along the way, they’ll encounter a man running for president (who has an odd fondness for Tootsie Rolls), tuba players from Pakistan, a guy with a snake tattoo, and a really large poodle.

They’ll also discover that they share a common bond. Anna, Henry, and José are all descended from artists or artisans who’ve sworn to protect the world’s artistic treasures. So what choice do they really have?! They must find the stolen flag before someone points the finger at the wrong person. But what can three kids do in a crowded airport with tight security? A whole lot, apparently. (As it turns out, airport security–at least in this story–isn’t designed to thwart three pre-teen detectives.)

As these three kids attempt to reveal the truth, they’ll step into a mess with huge ramifications. Can they get out of this safely and still uncover who’s behind the flag theft? And will they be prepared for what they eventually find? Who really captured the flag? Find out when you read this exciting tale of mystery and adventure by Kate Messner!

Capture the Flag is a nominee for the 14-15 South Carolina Children's Book Award.

All students in grades 2-5 will take MAP testing in September for reading and math. Classroom teachers will let you know specific dates for their class. Please be sure that your child is at school and gets a good night’s sleep. Encourage your child to do his/her best.

4th and 5th grade only