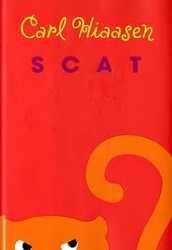 Scat is about how a teacher at Truman Middle School disappears.

Mrs. Starch disappears during a wildfire in the Black Vine Swamp while on a field trip with the Truman school;the school at which she works as a science teacher. A student named Smoke is suspected,due to his troubled past and fire experience;it ends up that Smoke is in fact innocent,and the Red Diamond oil company is to blame for the fire. The Red diamond oil company was doing illegal work in a section of the swamp. Mrs.Starch was never missing she was actually saving a baby panther and bringing it to it's mother.

The Florida Evereglades at sunset 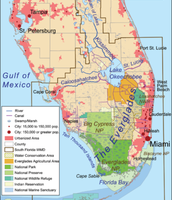 A map of Florida showing where the Everglades are

My Ranking of the Book

I give the book 5/5 *'s. I gave it 5 *'s because it was very suspenseful and mysterious. Never a bland moment. You never knew what was going to happen next. Once you think you have figured it out there is another twist that throws you way off. Always changing and revealing things about the characters you would never think to be true.

I think the authors message is that you shouldn't judge a book by its cover. You never know what someones life is like so who are you to judge them. You should get to know someone before you are able to judge them.

Smoke - Smoke happens to be a boy with a troubled past and no friends. Everybody is scared of the boy known as Smoke. Smoke has had a troubled past with arson and the police. But on the inside he really is a good boy.

Nick - Nick is a loyal,caring,and understanding boy. When his father is injured in Iraq he binds his left arm behind him so he can know what his father is feeling. He tries to comfort Marta when she is scared. He believes Smoke when no one else will.

Mrs.Starch - Mrs.Starch is really a caring and nature loving woman with a huge heart. All of her students think she is really mean and strict but she really just cares about there education and future. What kind of person abandons work just to save a baby panther and bring it back to its mother? You would have to be a pretty special person to do so.

The setting is in the Florida everglades; more specifically Black Vine Swamp.