What is Theater in Ancient Greece?

Theater in Ancient Greece was mainly meant for entertainment. Theater is putting on plays or performances for other people in the area. In order to make a play tragic or comic, the writers or directors of the ancient Greece play would have masks. But, that is a matter that I will be talking about in the future. So, in short, theater is basically entertainment for back when we didn't have T.V.s or phones.

In ancient Greece theater, they used costumes to disguise themselves as other people in the play that they are acting out. For example, they used masks made out of stiffened linen to make them look sad, happy, or to look like other people.They also used wigs. In addition, they reenacted the famous scenes from Greek mythology that had to do with the gods and goddesses. They dressed up as Greeks gods and goddesses like Hera, Zeus, Dionysus, Artemis, Athena, and so on. They also used cranes, ( not the ones looking like today, they were made of wood, ) to lift somebody up while acting a part. The actors of course had multiple parts, so they changed in a hut called a "skene."In conclusion, I think that costumes were an important part in plays in ancient Greece.

Theater from ancient Greece definitely impacted the plays we do today. The ideas of costumes, backgrounds, and even theater in general came from the ancient Greeks. Without them, we wouldn't have theater today. Even though theater originated from Greece, we have made a lot of changes over time. For example, now, women are allowed to play roles. Also, we have more advanced costumes, equipment, and possibly backgrounds. Do I think that most people would agree with these ways? Probably most people would, but not all. Even though theater today is more advanced than back then, it is still important to remember that if it wasn't for the people in Greece before us, we wouldn't have theater today with us. 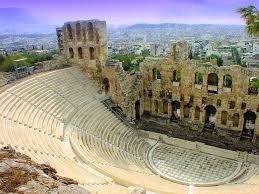