Get email updates from dane:

A Review of chapter 16

"The Rumblings of an Avalanche"

A Review of chapter 16

"The Rumblings of an Avalanche"

By spraying insects with chemicals such as DDT, methoxychlor, chlordane, heptachlor, and benzene hexachloride repeatedly, we are only furthering Darwin's theory of "survival of the fittest". The chemicals used may kill the weaker insects, but empowers the stronger bugs. Even though a wide variety of these chemicals may be stockpiled we will eventually run out, and that's when the more serious problem will start.

"If insects can become resistant to chemicals, could human beings do the same thing?"

Yes, but only after hundreds of generations of children. Due to human life cycles being much longer than insects it is possible; but insects adapt much faster than humans therefore one of the only plans of action is to spray as little as possible.

"The resort to weapons such as insecticides to control it is a proof of insufficient knowledge and of an incapacity so to guide the processes of nature that brute force becomes unnecessary."

Even though we may think that the human race is much more evolved than other species, we still do not posses the ability to grow alongside the environment and its inhabitants. We take away from the rest of the world and don't give anything back. While other species of animals co-exist with their peers we feel the necessity to dominate them to proclaim our superior existence.

"Life is a miracle beyond our comprehension"

Relating to the above quote. Carson brings to light the fact that we as a population are ignorant to the other 99% of our world. As Carson said, we don't need science here we need a sense of humbleness to lead our race to the point where force is no longer needed to help us help the environment. 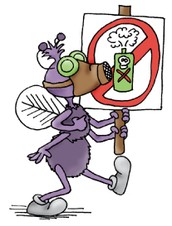 "If the dead end is reached before control of disease-carrying insects is achieved, our situation will indeed be critical."

Even though our situation right now is in major trouble, without the few remaining chemicals left it will get much, much worse. We like to think we still retain some control over insects across the globe but in reality we have lost most, if not all of it. When we have no more man made chemicals to produce where will we turn next?

The Use of DDT Has Declined

Up until 1972 when it was cancelled, DDT was a popular insecticide among the United States. Now that people have realized the negative consequences it has we can only manufacture it for foreign countries

Last Century almost all Insecticides fell under category I or II which means they were highly toxic or moderately toxic. Chemicals such as DDT especially fell under these categories

The use of many many statistics and quotes makes Logos one of the most prevalent and most persuading.

She asks many rhetorical question throughout the passage which help the reader to understand the enormous threat of insects around the world.

Carson Believes that spraying too much will be the inevitable end of Insecticides.

Which is true, considering that adapting rate of the insects is much much faster than ours. If we keep trying to kill off a particular insecticide we will not succeed we will only be hindering ourselves in the future when we run out of chemicals to make.