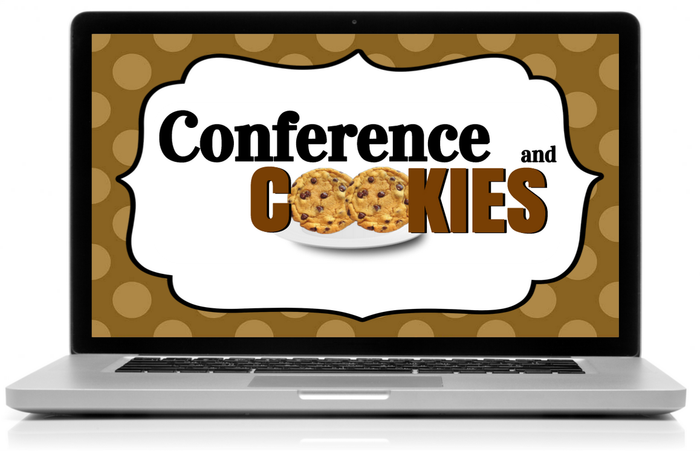 Quick response (QR) codes are easy to create and have many uses in the classroom. With the posting of a QR code, you can lead students to information quickly with their own device. And while making QR Codes for activities we are already doing in the classroom doesn’t take much time, it’s still nice to have ready-made QR code activities accessible with the click of a button. Anna ISD teachers now have access to grade-level, subject specific QR code activities.

5th Grade
Tech Around the District

(AMS & AHS) The Chromebook in the Classroom Grants were fulfilled this month! All four carts were delivered to the recipients of the grant and all classes had a Chromebook Orientation. Classes are in full swing of using 1:1 devices. Innovative updates coming soon!

(JKB) Mrs. Smallwood's 3rd graders got a techy take on vocabulary last month. Instead of writing the vocabulary words in their journals, students were introduced to their Google Drive (free file storage provided by Anna ISD & Google to all AISD students). Students used Google Slides to create an online presentation of their vocabulary words where they had to demonstrate understanding of the word by using the word in a sentence and finding an image that represented the word.

(AMS) Mrs. Rader's and Mrs. Coleman's 6th grade Language Arts classes have gone digital! Sixth grade students have been using Google Classroom to receive their assignments and alternatively, turning in their assignments. In addition to online assignments, Mrs. Coleman and Mrs. Radar have started producing instructional videos that students can watch on their time and at their own time... all to increase instructional support in their classroom!

(SER) October was a perfect time of year for Mrs. Boyette's first graders to learn about bats. Not only did her students read books about bats, they also looked up information on the Chromebooks using the website, PebbleGo, a kid-friendly research site available to her students. But Mrs. Boyette wanted her students to take it one step further. Instead of doing the traditional question and answer worksheet to show their understanding, her students delved into the world of technology by creating their very own webpage about the research they'd done. Three of Mrs. Boyette's first graders were introduced to Smore.com, a dynamic and creative way to create online flyers and webpages. The students turned their research from consumption of information to creation of new information with their own creative twist! 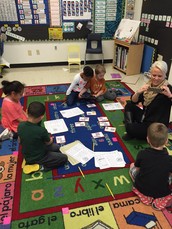 (ECC) There is not much the kindergartners won't put their hands on, and QR Codes are no exception. QR Codes, or quick response codes, are two-dimensional bar codes that are scanned with a QR reader (available on all smart devices) and provide quick access to information. This month, Mrs. Salo's kindergarten class was introduced to the world of QR codes. To add to their ongoing instruction of counting, students rotated through the QR code station to practice counting with ten-frames. Students scanned the code and a number was revealed. Students matched the card to the corresponding card on their recording sheet and then added dots to the ten frames. Students used the Dell Venue tablets available in Mrs. Salo's room to scan the codes. Watch the video below to see and hear the excitement of their first time using QR codes!

Kinders Use QR Codes for the First Time

(SER) Mrs. Bibb probably isn't your typical art teacher. While she considered herself very artsy, she also considers herself very techy. With a background in computer science, Mrs. Bibb has made it her personal mission to bring art and tech together. Last school year, she wrote a grant to the Anna ISD Education Foundation for a 3D printer for her classroom and WON! This year, she has been itching to try and who better than with her ultra techy fifth graders? After hearing Kevin Honeycutt, the district's convocation keynote speaker, she was inspired to let her students try Sketchup, a 3D modeling software that's easy to learn and incredibly fun to use... and FREE. Fifth graders used laptops in Mrs. Bibb's room to design their 3D object, uploaded the file to Google Drive, and easily shared it with Mrs. Bibb. Mrs. Bibb's goal is to print a self-created 3D object for each student before the end of the year!

(AHS) The American Sign Language classes at Anna High School are the first in history. And it is history they are making, upping their technology game. Students are venturing upon their first major project in the class, and Mrs. Gibson, their ASL teacher, wanted to add technology to increase engagement in her classes. But more than that, she wanted to add the video production element to their project so that they could critique and increase their own ASL skills. Students wrote sentences that described themselves and then "translated" the sentences into American Sign Language. What they didn't know is that they were creating a video storyboard at the exact same time. After being introduced to WeVideo, a free video editing software that is connected to Google Drive, students started recording themselves in the "All About Me" project. Although they were shy at first to see themselves on screen, they soon warmed up to the fact that the alternative was standing in front of the entire class LIVE. Students are still working on producing their videos, but their finished product, Mrs. Gibson imagines, will be hands-down nothing but impressive. 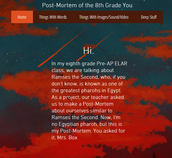 (AMS) When a given a choice, some students will surprise you. Most students will impress you. That's exactly what Mrs. Box's eighth grade ELAR students did... impress her. After reading Ramses the Second, she has assigned the Post Mortem project for a few years now, but the vessel is ever-changing. This year, she gave students the choice on how they wanted to present the Post Mortem of their eighth grade self. Students chose technology tools like Smore, a web page creator, Wix, a website maker, eMaze, a creative presentation tool, PowToon, an animated video maker, and Google Slides, a collaborative presentation tool.

Check out one impressive introduction that one of Mrs. Box's students submitted:

"In my eighth grade Pre-AP ELAR class, we are talking about Ramses the Second, who, if you don't know, is known as one of the greatest pharaohs in Egypt. As a project, our teacher asked us to make a Post-Mortem about ourselves similar to Ramses the Second. Now, I'm no Egyptian pharaoh, but this is my Post-Mortem. You asked for it, Mrs. Box." 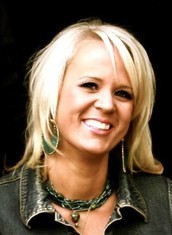 501 Sherley Avenue, Anna, TX, United States mindi.vandagriff@annaisd.org 9729241026 annaisdinstructionaltechnology.com
Embed code is for website/blog and not email. To embed your newsletter in a Mass Notification System, click HERE to see how or reach out to support@smore.com