Oak Park Elementary School District 97 will create a positive learning environment for all students that is equitable, inclusive and focused on the whole child.
Twitter Highlights: Week 30

Please click on the above link to see highlights from this past week. We are working to create a positive learning environment that is equitable, inclusive and focused on the whole child. No need to have a twitter account to view!

All eighth graders are expected to attend school on their last day, Thursday, May 31st. Report cards will be mailed home.

Each student will receive three tickets for the auditorium seating and two tickets for the OPRF annex seating . The OPRF Annex is located in the HS cafeteria. There, you will watch a live feed of the ceremony. Admission to the auditorium and annex for parents, guardians, and guests is by ticket only. Each person in your party must have a ticket.

Live Feed of the Ceremony:

The graduation ceremony can also be viewed online through YouTube. Share this link with anyone who is not able to attend the ceremony: https://www.youtube.com/watch?v=nt1Q4KTwCKg

There will be an 8th grade packet with additional information and permission slips sent home with our 8th grade students on Friday, April 13th.

Congratulations to your student's academic achievement for the second trimester of the 2017 - 2018 school year. Your Student's GPA has earned placement on the Honor Roll at Gwendolyn Brooks.

School Topic: Technology. Michael Arensdorff will be joining us. Child care is available.

SAVE THE DATE!!! and SAVE your trash for us to make into treasures.

Cleaning out? We'd love donations... things that work well are wooden chairs, small tables, frames, shelves, and interesting, quirky things we can repurpose. Also, we are collecting straws. If you get one at a restaurant, save for us! Not sure if what you have is a good fit? Shoot a pic and send to Mrs. Murray or Ms. Pabellon.

Last thing... Ms. Pabellon will begin maternity leave the first week of May and Ms. Williams (retired art teacher) will take her leave to help finish out this project and the year. We are excited to collaborate together!

Throughout these 10 weeks we have had students really step up into the leadership roles. Students created a tally sheet for other's to take home to a petition for the district's consideration, updated social media and even a constructed a letter to our Representative Camille Lilly.

The Brooks EcoEagles and Julian Green Team have connected and will be submitting an application to cohost a booth at Oak Park's Earth Fest on April 21st.

Dare to Do Mighty Things

Reaching Out Into the Solar System

Exploring the Solar System is an international effort that involves many nations. The robotic missions that pave the way push the frontiers of our abilities as a species and return data that illuminate the way all humans look at themselves. While there are examples of solitary human exploration, most endeavors that expand our boundaries involve teams of people working together for a common goal. This is one of those stories.

Ms. Cox will give three presentations.

To RSVP, call (708) 456-0300, Ext. 3372 between 9:30 a.m. and 4:30 p.m. Monday through Friday or send an email to cernan@triton.edu. When making a reservation, please provide a contact person, phone number and email address, which talk you plan to attend, the number of people in your party, and if you are a member of the Cernan Earth and Space Center.

These programs are open to the public.

Please help spread the word as we inspire the next generation of explorers.

Who is Nagin Cox?

Nagin Cox has been exploring since she decided as a teenager that she wanted to work at NASA's Jet Propulsion Laboratory. She was born in Bangalore, India, and grew up in Kansas City, Kansas, and Kuala Lumpur, Malaysia. Her experiences as a child in a Muslim household showed her how easily we separate ourselves based on gender, race or nationality, and it inspired her to do something that brings people together instead of dividing them. The Space Program helps the world "look up" and remember that we are one world. Thus, she has known from the time she was 14 years old that she wanted to work on missions of robotic space exploration.

Cox realized her childhood dream and has been a spacecraft operations engineer at NASA/JPL for over 20 years. She has held leadership and system engineering positions on interplanetary robotic missions including the Galileo mission to Jupiter, the Mars Exploration Rovers, the Kepler exoplanet hunter, Mars InSight and the Mars Curiosity Rover.

In 2015, Cox was honored as the namesake for Asteroid 14061 by its discoverers. She has also received the NASA Exceptional Service Medal and two NASA Exceptional Achievement Medals. She is a U.S. Department of State STEM Speaker and has spoken to audiences around the world on the stories of the people behind the missions. She has also served on Cornell University’s President's Council for Cornell Women.

Before her time at JPL, Cox served for 6 years in the US Air Force including duty as a Space Operations Officer at NORAD/US Space Command. She holds engineering degrees from Cornell University and the Air Force Institute of Technology as well as a psychology degree from Cornell. (Sometimes she is not sure which one she uses more: the engineering degree or the psychology degree.)

Cox is currently a Tactical Mission Lead on the Curiosity Rover, and every day at NASA/JPL exploring space is as rewarding as the first.

Bringing the entire Chicagoland community together to “spring green” their closets on Earth Day, April 22nd, 2018 and donate their unused items to Cradles to Crayons. For more information on where to bring your donated items and who benefits from your generosity, please see the linked flyer below:

To keep up-to-date on the activities and opportunities for your soon to be high schooler, please visit OPRFHS webpage often! The high school also sends out communications periodically to incoming Freshman class families - so check your email and mail for communications from the high school.

Here is link to OPRFHS Transition PowerPoint shared at their January meeting with 8th grade families.

To order a yearbook, please use this link:

Recognizing Staff who Make a Difference

If you or your student would like to recognize any staff member (a teacher, a teacher assistant, social worker, librarian, front office staff, lunchroom staff, custodial staff or school administrator) please take a moment to complete this form.

Thank you to those who have completed this form to recognize a GBMS staff member. All individuals receive a printed certificate highlighting your appreciation for their contributions!

Breakfast and Lunch Menus for April

Here is the link to the April Menus.

Service Club CAN DO CHALLENGE

The CAN DO CHALLENGE has started!!!

Student can ring money or non-perishable food items to your advisory to donate to the OPRF Food Pantry. The points they earn will be added to their advisory’s total for the year. The advisory with the most points after this project gets to take a field trip to deliver the food to the food pantry and lunch at Lou Malnati’s!

Advisories will be collecting items through April 30th.

You can also donate through the link listed below. 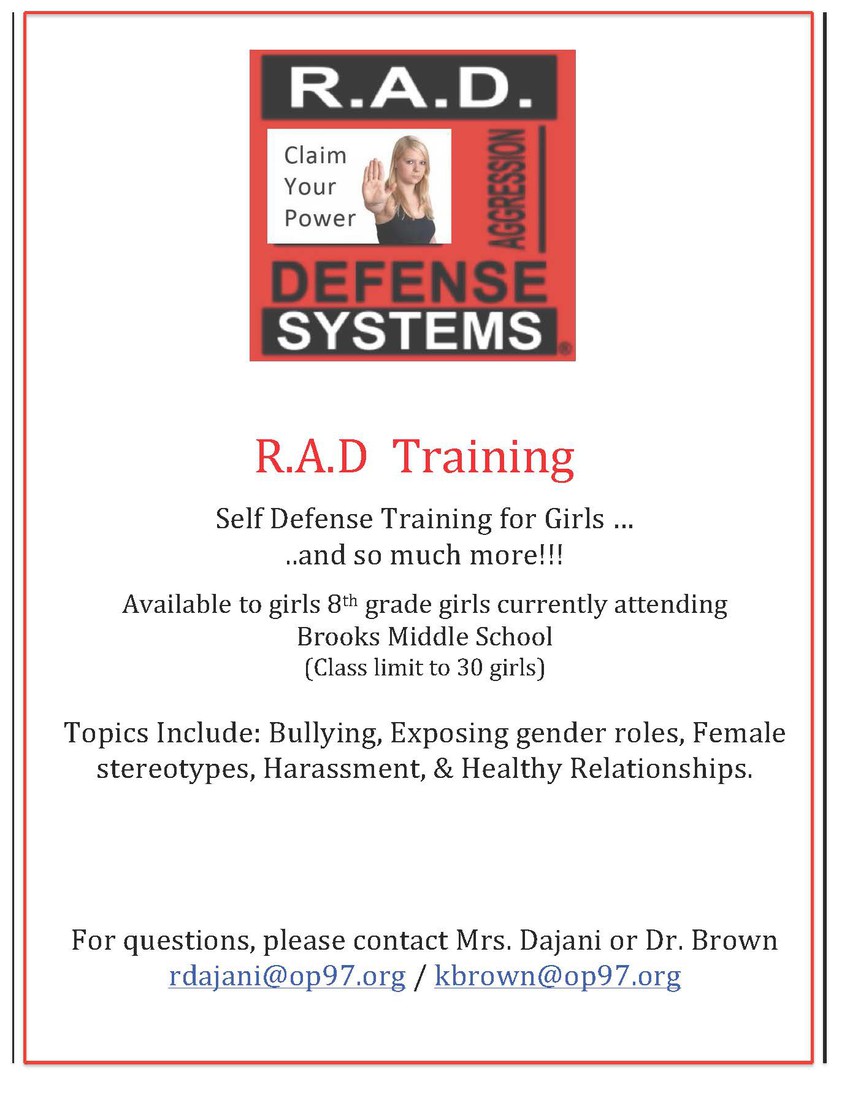 The games this week will have the JV playing at 4:00pm and Varsity right after.

Each club meets weekly, unless otherwise notated below.

Get connected to PTO

Earn money for the Brooks PTO: When you shop at Amazon, begin your shopping through the link here and our PTO will earn 0.5% of your total sale, at no expense to you. First time Amazon Smile shoppers will find our organization by typing Gwendolyn Brooks Middle School Parent-Teacher Organization. Thank you for your continued support.

When you registered your child, if you selected the option “No to Directory”, the school can not share your contact information with the PTO (Parent-Teacher Organization). If you'd like to subscribe to PTO Bulletin use link below:

Next Community meeting is Monday, April 9th, 2018 at 7pm in the media center.